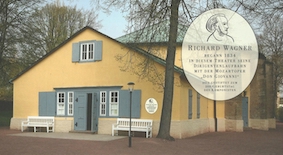 By Colleen and Michael Chesterman
This year we spent three weeks in Germany attending the two Handel Festivals in Gottingen and Halle. But we found opportunities for other musical experiences in culture-rich Germany. We noticed in Camron Dyer’s Ravens Reporting that Oper Leipzig was celebrating Wagner’s birthday week with performances of operas they had in the repertoire. One of these was Parsifal. We took trains for four hours from Gottingen. At the Opera House, we found a number of Australians who had been at the Verband meeting in Dessau, including Jane Mathews, Shirley Breese from Victoria and John Mayer President of the WA Society.

This production of the opera had originated in 2006, then had been performed for the Wagner celebrations in 2013, but in 2015 it was receiving only two performances, the other on 3 April. Ulf Schirmer conducted the great Gewandhaus orchestra. The direction by Roland Aeschlimann was very powerful. The sets and lighting were simple but evocative, with soft shades of blue on a scrim at the front of the stage. Scenery was projected behind this — in Act 1 large blocks representing trees, columns and the towering walls of Montsalvat. A dramatic triangle or vortex shape symbolized the Grail. In Act 2 this was shot with rainbow hues, bisected by a jagged red spear slashing across the triangle. In Act 3 the stage had a bare wintry tree and snow covered ground, which was in fact a sheet covering the concealed knights.

We had heard none of the cast before, but they showed German singers’ vocal expertise in this repertoire.

Gurnemanz was a strong bass, Runi Brattaburg, Amfortas, Mathias Hausmann, was also powerful. Jurgen Kurth’s harsh voice suited his presentation of Klingsor. Kundry, Karin Goring, was a compelling animal-like figure in Act 1 and a seductive temptress in a scarlet dress in Act 2. Behind her the flower maidens dressed in glowing satin and blond wigs moved languorously around Parsifal. Only the Parsifal of Daniel Kirch was disappointing; although successful as the young simpleton, he did not grow into power in the subsequent Acts. As a whole we were impressed by the quality of the production; it was a reminder one doesn’t need a festival experience or the grand houses. The seats in the fourth row were easy to get and reasonably priced. The house was not full. Indeed 50 free seats had been provided to the Leipzig Goth Festival, which at Pentecost attracts 20,000 visitors, wearing either stylish black formal wear and crinolines or tattoos, safety pinned clothes and spiky hair. They were the most enthusiastic in their applause at the end!

Our only other Wagner moment occurred at an opera performance at the Goethe Theatre, Bad Lauchstadt, about 22kms from Halle. Goethe had designed and part-funded the theatre for his actors’ company in 1802 in this beautiful leafy spa town. A plaque on the wall (see photo above) indicated that in 1834, aged 21, Richard Wagner had begun his career as a conductor, with Mozart’s Don Giovanni and met singer Minna Planer, whose portrait was in a corridor. The plaque was put up in 2013.