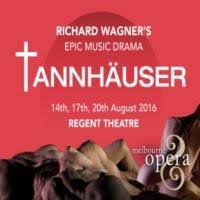 By Terence Watson
Clearly many Melbournians knew about the production since, for the opening performance, it seemed to your Editor that the stalls of the Regent Theatre were almost completely filled (only the stalls were open, I think)—that is, most of about 1800 seats. However, your Editor recognised only four other Sydney-siders at the event, indicating, surely, that the publicity and promotion did not reach very far from Melbourne. This would be disappointing, I believe, to many Wagnerians around the country who do not have many opportunities to attend live performances of Wagner’s works in this country. The situation is also a little more disappointing in that Opera Australia took out a full-page colour advert for the Melbourne Ring Cycle in the program. Could it not have been possible for OA to circulate an email to its Ring Cycle subscribers? Then there is, of course, the scope for networking information about Wagner productions through the many Wagner Societies in Australia.

Your Editor received an email from an eagle-eyed regular contributor to these pages in mid-August, in time for me to book a ticket to this performance by the Melbourne Opera at the Regent Theatre in Collins Street. I was very glad I had the opportunity to attend the first of the four performances (14, 17, 20 and 28: the fourth performance was at the Robert Blackwood theatre at Monash University). According to Melbourne Opera’s publicity, this was the first time that opera had been staged at the Regent Theatre—the company’s usual venue is the Athenaeum Theatre just across Collins Street.

It might be that Melbourne Opera determined that it could fill the necessary number of seats with locals to make their four performances viable. However, in a note in the program from the Patron-in-Chief, Lady Potter AC CMRI points out that: “All this [Melbourne Opera] activity is presented without any government subsidy whatsoever, a quite unique achievement in Australian professional theatre scene.”

At this point, your Editor has to confess complete ignorance about the existence of the company. According to its website: “Melbourne Opera Company Ltd was founded in 2002 as a not-for-profit public arts company dedicated to producing opera and associated art forms at realistic prices. Melbourne Opera is committed to the development of young artists, regional touring, and openness and transparency. The Board is elected annually by the financial membership, which is open to all. Repertoire and casting decisions are taken by an arms-length artistic subcommittee.” Melbourne Opera is also “a business name of South East Regional Touring Opera Ltd.” The company’s “University Performing Arts Partner” is Monash University, which appears to bring along with it involvement in the company’s operations by members of the university’s Music Department. The website also advises: “The current Melbourne Opera Orchestra has been developed into Melbourne Opera’s third orchestra since its formation in 2003. The Orchestra leads an active concert life as well as playing in the opera pit.” The orchestra is also available for private and corporate commercial functions. The company’s next production is Anna Bolena, 2 -12 November 2016.

So, how was the performance? In a word—Bravo! With no knowledge of the company’s previous productions, your Editor had no preconceptions about what I would encounter, although there was apprehension that taking on Tannhäuserwas no cake-walk, especially with the very demanding title role to be filled with a credible tenor. There was certainly no need to worry about this once the powerfully voiced Marius Vlad began to sing to Venus, who was sung provocatively, but not quite so powerfully, by the beautiful and lithe Sarah Sweeting.

However, we must pause to lavish praise on the video projections created by Zoe Scoglio that made this production, for your Editor, one of the most erotic and supernatural visions of the realm of the Venusberg he has seen. Such a change from watching naked bodies, however attractive they might be in themselves, writhing around the stage pretending to be in sexual ecstasy! Scoglio opted for partly abstract images, which seemed to me like a cascade of foaming Rorschach inkblots suggesting vulvas and the occasionally ejaculatory fountains, and partly naked bodies to create a constantly changing pattern of interweaving limbs and bodies before finally morphing into a “cave of female flesh.” Occasionally, during Venus’s and Tannhäuser’s duet, one of the projected figures would turn and seem to look at the singers. All in all, the fantasy of the video imagery matched beautifully the sensuality that Wagner intended to arouse with his post-Tristanesque music. (A taste of these images is given by the photographs from the production reproduced on the inside back and back pages of this Quarterly. As far as your Editor can determine, most of the photographs on the company’s Facebook page have been taken by Robin J Halls. I am grateful for the chance to show some of these to Wagnerians who were not able to see the production.)

Scoglio kept up the visual magic when the Venusberg transformed into the meadow scene. Here in the background, the “cave of female flesh” changes into distant mountain peaks, suggesting a kind of pantheism in the relationship between the erotic power of love and sex and the natural world. While the virtuosic video creations of Act I, scenes i and ii, became static for Act II. The opening of the curtain for Elisabeth’s “Dich teure Halle,” the scene revealed drew a delighted gasp and a burst of applause from the audience—the image on the back page gives you a sense of the power of the imagery. Lee Abrahmsen’s Elisabeth’s opening aria pinned our ears back, as she showed no effort in dominating those treacherous high notes with which the aria ends. In a role that can often sink into schmalz or saccharine, Abrahmsen projected initial vivacity that collapsed slowly into disillusionment and despair. To that opening image we must also add the delight at the way in which the lights came up on the stage to reveal the gorgeous back projection, giving us one of the most beautiful Wartburg halls I’ve ever seen. Thanks to the lighting designer Lucy Birkinshaw for a memorable moment of theatre. The entrance of the guests was also handled with great aplomb. The director Suzanne Chaundy had them climb a set of stairs from behind a slightly raised dais that completely crossed the stage in all scenes, giving a two level set. The guests’ heads then their bodies appeared until they were all standing on top of the dais, dressed in elegant evening attire. The competitors in the contest were lavishly accoutred in formal evening wear with colourful sashes. The overall impact was simple but very stylish; little fuss, but so well directed. The later, external scenes of the pilgrims returning, Elisabeth’s watch and prayer, Wolfram von Eschinbach’s “O du, mein holder Abendstern,” Elisabeth’s cortege, and Tannhäuser’s “Rome Narration” and Venus’s return, are all placed on the dais, in front of it, or on the ramp leading between the two. For each of the scenes, Scoglio and Birkinshaw created subtly changing lighting and video projections onto sections of the stage and across the dais, as well as the two crescent-shaped flats on either side.

Of the other roles, Eddie Muliaumaseali’i’s Hermann, Landgrave of Thuringia, stood out, with his powerful, rich bass, which reminded me strongly of René Pape singing Wagnerian roles at Bayreuth and the Metropolitan Opera. I hope that his career is a successful as is Herr Pape’s. Manfred Pohlenz’s Wolfram was solid, but lacked the romantic flair one expects from someone who delivers thataria as one of the highlights of the opera. Marius Vlad’s singing of the title role was a delight from beginning to end—apparently never tiring, and bringing fluidity and angular anguish as the situation needed. He was awarded “The Best Romanian Male Singer in 2010,” and has clearly gone on to bigger and better things, as examples of recent performances: Tannhäuser at the Romanian National Opera and at Theater Freiburg, Lohengrin at the Novaya Opera in Moscow, Theater Freiburg and the Romanian National Opera, Froh in Das Rheingold with Daniel Barenboim at Teatro alla Scala, Staatsoper Berlin and at the BBC Proms in London. You can read more about him at: www.speltartists.com/#!mariusvlad/e2wje.

While the orchestra, under the direction of David Kram, sounded a little thin at times for a Wagner orchestra, they played with conviction, nuance, and mostly with precision, apart from some shaky entrances. There were, as far as I could hear, no brass fluffs that so often mar the playing of orchestras not entirely familiar with Wagnerian demands. One advantage of the apparently smaller orchestral sound is that it did not drown out the singers. Kram appeared to take the music at a pace, partly perhaps for the singers’ benefit, partly to stop the work dragging as it can in some of its more tendentious moments, and partly perhaps to get everyone home in good time. Whatever the reason, his brisk pace certainly kept my interest and excitement from flagging.

The (English?) Pilgrims in Melbourne Opera’s 2016 production of Tannhäuser(www.facebook.com/MelbourneOpera)

One of the peculiarities of the production was that the Pilgrims sing in English, while everyone else sang in German. While, this is probably less of a trial than the late 18thand early 19thcenturymulti-lingual performances of Wagner operas in Australia, I glided over the anomaly by choosing to imagine that they were Chaucerian pilgrims on their way from Canterbury. The second peculiarity was the complete deletion of the moment when one of the pilgrim’s enters carrying Tannhäuser’s blossoming staff. I, for one, was quite happy for this very odd choice of Wagner’s)—are we to take it as ironic or sarcastic or entirely straight—to be left out. Ending the work with both Elisabeth and Tannhäuser dead seems more modern and internally coherent. However, Wagner told us that he still owed the world a Tannhäuser, so this directorial decision might have given us a hint of what that work might have been like, had Wagner revised it—yet again.

All in all, this production is one of which Melbourne Opera can be proud. It is to be hoped that they will again tackle another Wagner opera in the not too distant future (and let us all know about it).

You can read other reviews of the production on the company’s website: www.melbourneopera.com/reviews-quotesand see more photos on Melbourne Opera’s Facebook page: (www.facebook.com/MelbourneOpera).