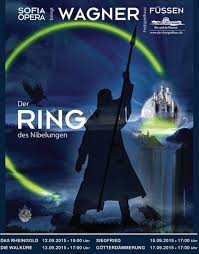 By Terry and Julie Clarke
We left our yacht in a harbour close to Rome and travelled to Sofia, capital of Bulgaria, for the Ring at the end of July. Bulgaria is the poorest country in the European Community but rich in history and culture. Apart from a few potholes in the pavements the towns are clean although designer shops at street level belie the crumbling buildings above. The people, however, are extremely pleasant and helpful. English is almost universally spoken, there were even English surtitles at the opera.

There was only one cycle of what they claim to be the first ever fully staged performance of Wagner’s tetralogy in the Balkans and these have been lovingly prepared over the last five years. The enthusiasm of all the participants was palpable and their determination that their visitors should enjoy their stay and appreciate the Bulgarian artistry was overwhelming. Coming from Australia we seemed to be the object of special attention by the organisers and were interviewed four times for Bulgarian television.

The performances themselves were notable for the complexity of the stage management and the lighting. The basic stage motif was a circular elevated ring which could be cut in two and moved in a variety of shapes, as the River Rhine, the magic fire, Dragon’s cave and much of the stage setting. There were also a number of large cones which were used to represent Valhalla and power. They also double as horses for the Valkyries. The almond-like mandorla, a swing for birth and death, also turned into a boat for the journey along the Rhine. Much of the lighting was by projection. This was used throughout to make for extremely bright and colourful scenes. There was a remarkably effective flowery spring for Winterstürme and fire for Brünnhilde’s rock and the final scene was breathtaking.

This is the first opera Nikolai Panayotov, a notable Bulgarian abstract artist, has designed. The sets and costumes were colourful, timeless and futuristic, if sometimes a little strange. Hunding, dressed as a kind of Korean warrior had one and a half metre horns projecting sideways from his shoulders and Fricka, in Act Two of Die Wälkure appeared with huge white plastic cloak which ballooned out behind her. Since she arrived on a moving walkway above the stage, which juddered, rather than moving smoothly, this appendage bounced in a way alarming for the audience as well as the poor singer. There seemed to be no expense spared in the costume department, no boring single get-up for Siegfried and even Gutrune had four changes of dress.

All the singers were Bulgarian, apart from the first of three Brünnhilde’s, who was Mongolian, although she studied at the Conservatoire in Sofia from 1986. She had to sing the whole of the second act of Die Wälkure standing high on a narrow cone, which was wheeled around by a stage hand. This precarious position made her singing somewhat strained.

The Bulgarian National Opera provided two excellent Siegfrieds: Martin Ilev also played Siegmund and Konstadin Andreev whose ringing voice stayed with him right to the end of his eponymous role. Not so his Brünnhilde who transposed all her high notes down an octave so that the final note of the love duet was completely lost. The Brünnhilde inGötterdämmerung was strong throughout.

The orchestra numbered 93, filled the pit to overflowing and produced a rich and exciting sound. They were conducted by Erich Wächter, one of only two German’s to be involved in the project. The other was the 81 year old Richard Trimborn who has been involved in 11 Rings and has donated the last five years to this project.

There was so much to enjoy in this Ring that criticism is invidious. The credit for the success of the project must go to the Director, Plamen Kartaloff, whose dream this has been for many years. His desire to express what he feels about the Ring meant that every stage picture was packed with meaning and nuance, much more than one could comprehend on a single viewing. He meticulously follows the text and music.

Thus a splendid and fascinating production! It is to be repeated from 4—9 July 2015. I would urge anyone who may be near Sofia next year to attend. It is inexpensive and you will be treated royally.