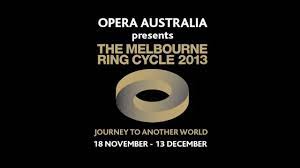 By Richard Mason
It is worth stating the enormous achievement of Opera Australia in finally performing the Ring, after many years of waiting and an embarrassing false start 30 years ago. As the replacement list shows, there were a number of hurdles to overcome on the way. Doubtless, many of the audience were Ring neophytes and, hopefully, Ring converts. The State Theatre proved a fine venue, with a clear singing acoustic and a lush orchestral sound.

To start with the best: the conducting and orchestra. Throughout the conducting was extremely beautiful, with fine details in the wind and brass. After becoming slightly bogged down in the Loge-Alberich exchange in Rheingold, Pietari Inkinen improved in Walküre to create drama, passion and fine tension. Siegfried is a notorious trap for conductors – play the Riddle scene too slowly and Siegfried can exceed Götterdämmerung in length; play it too quickly and the opera becomes exciting, but superficial. Inkinen judged the tempi perfectly, and again produced a beautiful and rich account of the score. The Götterdämmerung tempi were also well judged, although by Act III the brass section was showing signs of wear.

Terje Stensvold struggled with the higher notes in Rheingoldand Walküre, but had a strong voice, more suited to the lower- pitched Wanderer. He avoided the twin evils of the bark and the wobble. He had a reasonable legato and dark colour, but was very monochrome and relied on a limited vocabulary of gestures for acting. There was no character change or ageing between the first two operas, and minimal adjustment forSiegfried.

Susan Bullock was a disappointment as a singer: her loud notes were very harsh, sometimes a squalk. She was somewhat improved in Siegfried with a fine awakening. Her acting inWalküre was dramatic in a tomboy fashion. In Siegfried, she woke up well, with convincing acting to the end and had discarded the tomboy gestures. She convincingly made the transition to a mature, vengeful woman in Götterdämmerung, and her harsh voice was suited to the dramatic confrontations of Act II. Her Immolation scene was powerful, notwithstanding some more harsh notes towards the close.

Stefan Vinke had a peculiar voice: the top half a fine heroic tenor, the lower half thin, coarse and sometimes slightly flat. There were pitch problems also with the transition between upper and lower voices. He sang the forging song well and had some fine passages in the final scene, particularly “Sei mein.” He gave a convincing portrayal in Siegfried as an irrepressible teenager. His acting in Götterdämmerung was reasonably convincing, apart from an inexcusable rude gesture in Act III. Also in Act III, he suffered more prolonged pitch problems but, paradoxically, produced a more even colour across the range.

Warwick Fyfe dominated Rheingold with a strong vocal characterisation of Alberich and a rounded dramatic account. His performance in Siegfried was magisterial, sinister and manipulative in Götterdämmerung.

Deborah Humble produced a very rich sound for Erda, powerful and expressive. She continued an effective vocal characterisation in Siegfried, notwithstanding the impediment of the eccentric staging. Her Waltraute was the high vocal point of the cycle, dark, dramatic, doom-laden and mesmerising.

In other roles: Stuart Skelton was a magnificent heldentenor, with a long, long “Wälse,” dramatic and sympathetic. Miriam Gordon-Stewart acted Sieglinde well and had a good middle voice with touches of harshness at the top and weakness at the bottom. Jud Arthur was a grim voiced and effective Fafner and Hunding. Barry Ryan sang and acted well as Gunther. Richard Berkeley-Steele gave a slick characterization as Loge, but his extreme wobble made his narration difficult to listen to. Graeme Macfarlane was exaggerated and whiny as Mime, with pitch in the upper part of voice very approximate. Jacqueline Dark failed to make much vocal impression in either appearance as Fricka. Daniel Sumegi had an unpleasant occluded tone throughout and was notably unsympathetic as Fasolt. Sharon Prero was a harsh Gutrune.

The production was a confused jumble of ideas, with little cohesion. Each opera had a different style, as if designed by a committee. The Valkyrie rock, which with appearances in each full opera is an important unifying element for the cycle, was staged entirely differently on each appearance.

In Die Walküre there was excessive use of the stage revolve as a substitute for an idea. Act I displayed a good set for Act II ofLa Fanciulla del West, complete with snowstorm and red-haired Minnie. Act II was staged on the spiral staircase of a museum, like the Guggenheim (critics unfairly compared it to a multi- storey car-park), effective at allowing characters to move, an intelligent solution to the problem of a meeting place for gods and mortals. The Act III stage was virtually bare, with a modest fire.

Siegfried was a random collection of effects: an irrepressible teenager in a curly ginger wig, the Wanderer as an ageing hippy, an invisible dragon, Fafner naked after being stabbed, an annoyingly omnipresent woodbird, Erda sung by a nurse wheeling an elderly woman in a wheelchair who mouthed the words, the magic fire a glittering theatre curtain, a false proscenium arch with lightbulbs in each act, Brünnhilde in a wooden crate.

Götterdämmerung produced a more unified staging, with a house framework, which served for Brünnhilde’s cave and the Gibichung hall. The most effective act in the entire cycle was Act II, staged as a wedding banquet: it caught well the dramatic interrupted ceremony. Act III was an anti-climax, another jumble of random ideas. At least the fire was convincing.

There were a few good dramatic ideas scattered around: Fricka dressed in the same material as the Rheingold, the appearance and theft of the Rheingold, Alberich swearing his oath on Wotan’s discarded spear, the spiral staircase in Act II of Die Walküre, the wooden crate confining and protecting Brünnhilde, Siegfried’s childhood security blanket, which comforted Brünnhilde, Gutrune as a mutton-dressed-as-lamb bridezilla.

To summarise, the production had quite a few good ideas, but these were thinly spaced. I am reminded of Verdi’s criticism of the Paris Opera as a “Department Store” – good work here and there, but no controlling will.