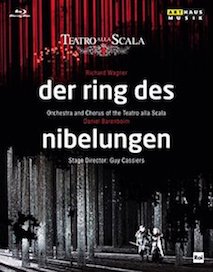 By Liz Jacka, Colleen & Michael Chesterman & Lyn Longfoot
A sizable contingent from Australia, including a number of members of the Wagner Society in NSW attended La Scala’s staging of the Ring Cycle in June. The production was the one already mounted at the Staatsoper in Berlin and was conducted by Daniel Barenboim, directed by Guy Cassiers with production design by the team of lighting director, Enrico Bagnioli and the Belgian video artists, Arjen Klerkx and Kurt D’Haeseleer. A controversial addition to the production concept was the choreography of Sidi Larbi Cherkaoui, which was seen in Das Rheingold, Siegfried and Götterdämmerung.

This brief report on the cycle has been compiled from the impressions of several members who attended the first cycle from June 18 to 22. Colleen Chesterman was impressed by the theatre itself and its recent restoration. Her observations were as follows. “Barenboim’s Ring was an opportunity to spend a week in Milan, a city I had visited only for a day or so. And that was wonderful – splendid art galleries, interesting early Christian churches, great food, stylish window displays and shops, interesting villas. And la Scala itself is magnificent – a beautiful building which was extensively renovated from 2002-4 under leading architect Maria Botta. It was extraordinary to see the additions that were made to the historic building – including a huge fly-tower visible from the neighbouring streets, but the improvements are marked – seven flies can be held at a time, the huge backstage means sets can be stored, great doors at the back means trucks can deliver directly from the government-provided workshops at a disused steel factory at Ansaldo, the removal of carpets means that the sound is improved, the pit has been increased in size and there are back of seat surtitles in languages other than Italian. None of this has affected the romantic atmosphere in the tiers of boxes, the curving corridors, mirrors, and curtains, nor the splendid reception rooms. One felt great sadness at the limitations imposed by our wonderful Opera house! But – here are problems, which we experienced in a very well placed box diagonally below the Royal Box, which a Milan friend had organized. The boxes, seating six, have only two chairs with backs and there are only three surtitle monitors. There are real problems in sitting for the length of a Wagner opera! And the boxes designed to give their owners great privacy, also impose a real distance from the stage action. A great experience, but the stalls from now on!

The organization of the Festival was excellent, particularly for premium subscribers– welcome drinks and snacks, tours of the backstage, museum, boxes and a separate one of the Ansaldo workshops, 20,000 square metres of set design, carpentry and assembly, costume design, rehearsals. They store 60,000 stage costumes, and show historic ones and also have miniatures of sets, by Visconti, Zeffirelli and others. Visits to these can be booked separately. The Festival also included introductions to the operas and films such as Visconti’s Ludwig and Tony Palmer’s 8-hour Wagner.”

There was general agreement that the quality of the orchestral playing was superb – with Barenboim conducting the Orchestra de Teatro alla Scala. However, most found Barenboim’s tempi dangerously elongated, proving most damaging in the final opera of the set. Michael Chesterman describes the effect of the slow tempi: “I never thought I would find a lack of drama and tension in Barenboim’s conducting of Wagner. But I did, particularly in the Immolation scene. At other times, I had liked his willingness to point up different phases of the score by slowing down the pace at appropriate times and allowing quite long pauses. But increasingly he overdid this form of expression. Or perhaps he and/or the orchestra had got tired. (Or I had.)”

There was much enthusiasm for the quality of the singing with the exception of the usually faultless Rene Pape, who played Wotan in Die Walküre. While tonally sure, he was strangely low-key, almost withdrawn, and thus the emotional impact of the usually highly moving third act of Walküre was dissipated. We were extremely impressed by the wonderful singing and acting of Terje Stenswold (due to sing Wotan in the Melbourne Ring) in the role of The Wanderer inSiegfried. There was also high praise for the Brünnhilde of Irene Theorin, the remarkable Waltraud Meier’s singing of both Sieglinde and Waltraute in Götterdämmerung, and for the very moving Fricka of Ekaterina Gubanova. The difficult role of Siegfried was filled by two different singers, the not very vocally secure Lance Ryan in Siegfried and the much more assured Andreas Schager in Götterdämmerung. The other male roles of the Giants, Alberich, Mime, Loge, Gunther, Hunding and Hagen were as usual splendid.

The two most controversial aspects of the production were the production design and the introduction of extensive dance sequences. Another Wagner Society NSW member commented as follows on the production: “Huge waste of resources. No story, no message (I see the Ring Cycle as about exploitation at the very least, with the message that to advance at another’s expense is no advance at all). The direction was at odds with the text often enough, let alone the music. It was a big disappointment. However it was abstract and visually interesting, enough, on a frame by frame basis, to be entertaining. But overall, despite some spectacular singing and playing, and undoubtedly spectacular images, any message was trapped in a series of musical and visual tableaux lacking the essential sense of inevitable self-inflicted downfall as a consequence of the original wrong – the rejection of love.

Guy Cassiers, the Belgium director, used the Jef Lambeaux (Belgium 1852-1908) marble bas-relief “Human Passions” as his template to build up his concept of the Ring, and I wonder if that is where he, and it, stalled. Because, like the bas-relief, static and sculptured is what the finished product seemed to me to be, a dissected and pulled apart jigsaw reassembled over sixteen hours and, after enormous efforts at theatricality and display, ended up really having taken the audience anywhere.”

Most supported this view; however, my own thought was that, very far from being static, the visual design was ever-changing. While many of the video projections were based on the bas-relief they were put through a constant metamorphosis which ended up presenting more visual information than it was possible to assimilate. I saw the visual design often emulating the motivic structure of the music with visual elements being echoed and re-echoed in the way the score recalls musical symbols of the ring, the Rhine, the magic fire, the spear, the blood of blood brotherhood etc. When the visuals were not acting on this symbolic level they were quite wonderfully and delicately calling up images of the forest, the mountains, and so on.

Of the dancing Lyn Longfoot comments: “Excited by my first visit to La Scala and the prospect of seeing the Barenboim / Cassiers Ring, and eventually sorting out my box seating issues to my satisfaction, I settled back to enjoyDas Rheingold. It soon became evident that my appreciation and tolerance levels were going to be seriously challenged by the appearance of a number of extraordinarily supple and expressive dancers, cavorting like mobile sculptures around each other, the stage and particularly up close and personal with the vocalizing characters. I could only ask, ‘Why are they there, demanding so much of our attention?’ It was impossible to ignore their intrusive presence.”

My reflections on the role of the dancers included that they were providing the audience with the opportunity of experiencing a new and additional element on stage, of what could be described as ‘high art’ comparable to a live, fluid expression of classical Greek sculpture, as seen on friezes, buildings and sarcophagi. As the bodies writhed around in at times tormented movements, coming together to form and then unpack amazing tableaus, or taunting the singers, I could only see in them classical sculpture in movement. was echoed in the large frieze which appeared as a classical backdrop to sets, most effectively at the end of Götterdämmerung. The dancers were like characters from the Commedia dell’arte, featured in ceramics and etchings in the historic exhibits in La Scala’s museum, now practising their art once again in a contemporary setting. Expressive in their movements and faces, which ranged from playfully mimicking, teasing and taunting, they challenged the characters to reveal greater depths to their inner turmoil and darker sides.

Would the Master have liked these dancers? If he wanted to challenge his audience to experience an even deeper engagement with what was happening on stage, I think he would have been OK with them. After all of the intellectual exercise of coming to grips with the dancers, it was somewhat of a relief to later see that they weren’t needed in the following three operas. For my part, I was more engaged with this production of Das Rheingold, than I have been with any other I’ve seen.” Others found the dancing gratuitous and observed that the dancers’ presence, especially in Das Rheingold, simply interrupted the communication between the singers and thus disrupted the dramatic and emotional flow of the work. Overall, as evident from the diversity of views outlined above, this production was stimulating and perhaps provocative, but ultimately artistically satisfying.