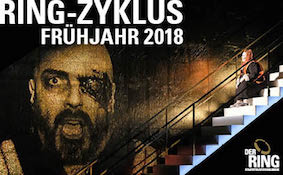 By Terry and Julie Clarke
When the curtain opens during the prelude to Gotterdammerung and you see three men on stage sitting on cinema director’s chairs you can be assured that you are about to witness another example of German regietheatre. This we duly did in Karlsruhe in May 2018.

Karlsruhe is a pleasant city in south western Germany. Completely flattened by the RAF and USAF towards the end of the war, it has few of the attractions of nearby Heidelberg and Baden-Baden and is thus, unsurprisingly, free of tourists. It does, however, have a fine, post-war opera house and a longstanding reputation for music making, opera and Wagner in particular.

The new Ring Cycle in Karlsruhe was unusual in that each opera had a different director. It was no surprise that there was little coherence between the individual operas, since we understand they only had one brief meeting in Iceland. Das Rheingold was the most recognisable of the productions and each one thereafter became increasingly bizarre.

It must be mentioned at this point that the orchestral playing under Justin Brown, their regular director of music, was superb and the singing, overall, was very good. But back to the productions.

The final act of Siegfried can give a flavour of the first three nights. The poor hero had to do his whole awakening scene by himself in a derelict museum since there was no sleeping Brünnhilde in evidence (‘das ist keine Person’). Finally, Heidi Melton as Brünnhilde did emerge, standing, through the centre of the stage, but the unkind director had costumed her as every jokey cartoonist’s depiction of a Wagnerian soprano, right down to the long blond pigtails. It was an uncomfortable final scene.

Fortunately for us we had been privileged to meet Katherine Tier, the Australian mezzo, who had many roles in this Ring, (Fricka, Waltraute, Erda, Norn, Rhinemaiden) and she was able to give us some inkling of what it was all about.

It was Götterdämmerung in which the most egregious directorial excesses took place. The three men mentioned at the start were in fact the Norns, they were not only girls in male attire but also made up to resemble the directors of the three previous operas. Furthermore, they featured in many of the subsequent scenes moving in and out from the wings until finally morphing into the Rhinemaidens. Katherine Tier, as the First Norn, stripped off her male clothes to reveal a shift so that she could transform into Waltraute in her scene with Brünnhilde – a girl playing a boy playing a girl.

All the characters were in some form of modern dress. Siegfried, the hero to save the world, was a scruffy individual with lank, unwashed hair wearing a dirty undervest and a tendency to drop his trousers at every opportunity. Fortunately, he sang with a sonorous ringing tone which he sustained until the end.

Act Two started with a particularly revolting Alberich in his underclothes who appeared to have been castrated quite recently. Later in the scene Hagen also castrated himself with a knife although once he had got his trousers up again he managed to summon the vassals without apparent discomfort. A live black pony was brought on to the stage so that it could be ritually sacrificed and emerge later as a corpse so that Hagen, Gunther and Brünnhilde could smear themselves with blood.

In Act Three, shortly after the (male, director) Rhinemaidens had refused to accept the ring. Siegfried attended a barbecue and was stuck in the back with a kebab skewer from which Hagen had been eating the meat. He was left to lie on an empty stage for the whole of the funeral march being cuddled by Gunther, for whom, from their first meeting, he had shown a particular fondness. Hagen stabbed Gunther when he attempted to snatch the Ring but then, for good measure, stabbed Gutrune as well. However, in her dying frenzy she managed to grab the knife and kill Hagen. The stage was strewn with bodies like the end of Hamlet. During the final moments of the waters of the Rhine overflowing and the music of redemption we were treated to the sight of the final death dealing scene being played in slow motion and in reverse with all the players in turn arising from death and leaving the stage backwards. What we heard was undoubtedly Götterdämmerung but what we saw was decidedly not. Directors such as Tobias Kratzer appear to derive pleasure in proportion to the amount of outrage they can engender in their audience. I have no doubt he is mightily pleased with himself.