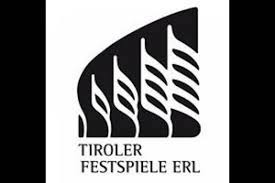 By June Donsworth
The logo for the Tiroler Festspiele Erl Sommer is one of profiled cows in a row, alternating with a Cello— charming and a bit quirky, a perfect introduction to this four day Ring Cycle, held in the Passionsspielhaus [Passion playhouse—referring to the tradition of performing the Christian passion story] in a very green valley in the Austrian Tyrol. The instigator of this Ring in the Tyrol is the charismatic and great storyteller Gustav Kuhn. He is the “Musicalische Leitung und Regie” and it is very much his conception and execution. We, a group with Renaissance Tours, were very lucky to have him talk to us in the splendid next door building, the two year old Festspielhaus, (a black angular spiky building which sits in striking contrast next to the white round-fronted older Passionsspielhaus). They make a stunning statement in this beautiful countryside.

The meeting with Kuhn was kindly arranged for us by Sharolyn Kimmorley, who is in Erl each year as repetiteur to prepare the singers, whilst her husband Brett Berthold is playing Double Bass in the orchestra. Kuhn explained to us that his conception for The Ring is that, although it is in modern dress, it is very “traditional” in that his ideas remain close to Wagner’s text and he has not imposed a new, political or idiosyncratic interpretation on the basic story. In other words, his Ring is very much NOT Regietheater.

In the Passionsspielhaus, the audience sits close to the singers, as the stage is wide and shallow, and the orchestra sits behind the singers, in a stepped vertical pyramid, warmly lit by the glow from their music stands, forming the backdrop for the stage. The six harps are at the top of the pyramid, with their spikes forming a triumphant top flourish to the ensemble. Brilliant, visually and aurally. The rationale for this is that the 120-piece orchestra does not overwhelm the singing, and the acoustics in this 55 year-old theatre are excellent.

We enjoyed people watching the crowd outside the theatre, each afternoon still in blazing sunlight, and especially enjoyed the Austrian women and men dressed up in their “Trachtenmoden” (traditional mode).

Das Rheingold started well, with the three Rhinedaughters, dressed in filmy, floaty blue, mauve and green dresses swaying and swinging from tall ladders manipulated by black clad men. Alberich (Thomas Gazheli) dressed in a grey suit and vest, was suitable grabby and lusty and sang with great force. In Valhalla, both Wotan and Loge were also in grey suits, with Loge’s only concession to his character being marked by a bright red tie and wonderful red shoes. Wotan (Michael Kupfer) really never hit his stride and Loge was rather static in his acting. The Nibelung scene was reasonably simple and effective, but the horror of the Nibelungs’ slave status somewhat diluted because they were acted by children aged about 12, with the girls all sporting luxurious blonde ponytails. Fricka was tall and glamorous and sangvery well. Kuhn had explained to us that one of only a few “contemporary” interpretations was to imagine Froh and Donner as current sporting “gods”, so Fasolt was an American football player, Fafner a prize ice hockey player. Alberich was marvelous in voice and acting when the Ring was wrestled off him. The rainbow bridge was missing, but at the finale some of the Gods ascended through the pyramid of the orchestra.

Act I was a domestic scene, with kitchen cabinets, table and chairs, a tall dresser at the back, with what looked like a washing basket with some white linen piled in it. The sword Nothung was sticking out of the front centre stage. It was ridiculously easy to pull out! Siegmund made a big thing about having hurt his knee and throughout he limped. Sieglinde was tall, good facial bone structure and acted with great dignity and the best voice of the three in this Act. There was definite palpable emotion transferred between Sigmund and Sieglinde. Hunding in leather jacket and pants lacked the menace and threat in his voice that should fill this scene with foreboding and make the love scene so tragically transitory. At the end of the love scene some invisible threads pull the white linen up out of the washing basket and it drops over and envelops the lovers (reminiscent of a mosquito net). A bit corny.

In Act II, Wotan (Vladimir Baykov), dressed in grey trench coat, black hat and sunglasses, had a lyrical voice, but was lacking in command. Brünnhilde (Bettine Kamp) was very slim, with lovely natural brown curly hair, dressed in silver leather pants and a very becoming long silver coat, sang beautifully and was very warm and loving towards Wotan. Fricka (Hermine Haselbock) was magnificent—tall, slim, red leather pants and vest, red high-heeled boots and with a good, strong soprano voice. The scenery was composed of different shaped and sized boxes scattered on the stage. For me, the Annunciation of Death scene lacked the pathos and intensity that can bring tears to the eyes. In the fight scene, although Siegmund had his sword, Hunding for some reason killed Siegmund with a pistol.

In Act III, the Valkyries rode bicycles! Kuhn had told us a joke about this. He said he had tried to buy on
Ebay a Luftross (flying horse), but had only succeeded in acquiring a Stahlross (steel horse), which explained (according to the joke) why the Valkyries rode bicycles instead of horses. This scene worked very well. The Valkyries were dressed in silver grey skirts and vests (one with VERY short shorts), boots, floating grey gauzy bits off their shoulders, riding grey bikes with their spokes filled in with grey paper. Some of them carried dismembered limbs. Brünnhilde entered on a stylised wooden horse with Sieglinde slung over the saddle. Her helmet was a black velvet riding hat. Her voice and acting, terrific. Her pleading to her sisters and their refusal to help was very effective. There was a strong emotional connection between Brünnhilde and Wotan in the farewell scene.

In Act 1, the scene consisted of a cooking place to the left, in the middle some kind of grinding thing with a grid in front of it glowing red, and to the right an anvil also glowing red. Siegfried, youngish, with thickset body, came in with a cardboard bear, and from then on carried a teddy bear with him everywhere. Mime sang in a very “straight” voice without the usual nasal twangy “character” style. The Wanderer was the excellent Thomas Gazheli. He had been Alberich in Rheingold.

In Act II, the tall pillars on either side of the stage were lowered horizontally to create the forest. The first scene, mostly in the dark between Alberich and Wanderer, was very powerful. The dragon was hidden in a net at the back and when the net was removed, the dragon was revealed to consist of lit up wooden jaws, and was sung by Andrea Silvestri, with a wonderfully deep resonant voice. Siegfried (Michael Baba) appeared very casual and unperturbed whilst Mime sang and his thoughts were understood by Siegfried. Siegfried got up from where he was sitting and wandered over to Mime and very casually stabbed him. In the scene between Siegfried and the Wanderer, Siegfried was just not brattish or arrogant enough for my liking. This scene should be a heartbreaking disconnect between two generations, instead it was a bit limp.

In Act III, the centre of the stage was a black structure resembling a meat safe, which turned out to be Brünnhilde’s rock. The Wanderer pulls up a trapdoor and a gorgeous Erda popped up. She had a cherubic face, dressed in midnight blue dress with long train that trailed after her and nearly tripped her up when she was up on the stage. A great scene. Then the waking up scene. The meat contraption lifted. All those little girls and one black boy who had been the Nibelungs came down through the audience with lit-up flares, formed a circle around Brünnhilde’s oval alabaster bed, which had a silvery grey mattress and plump silver grey cushions hiding her. Brünnhilde (Joo-ann Bitter) finally arose—she was a fine looking woman, tall and slim with sheer black long sleeved coat dress and inside that a white satin top. She had an excellent, lovely voice. Siegfried unimpressive. They finally embraced and the bunch of kiddies re-appeared and sat on the edge of the alabaster bed, clutching teddies!

The Norns, in net-like costumes, wound cords around steel spiky structures. James Roser from Sydney sang a very credible Gunther. For me, the best scene was that between Hagen (Andrea Silvestri) and Alberich (Thomas Gazheli), two of the best singers in the whole Ring. Hagen was asleep in front of a bench with Alberich suspended above him and gradually lowered. It had a dreamy quality to it. Brünnhilde’s immolation scene was quite effective, with real (and smelly flares) making the flames.

Gustav Kuhn conducted with great gusto, and received enthusiastic applause. I am not a skilled music critic but I thought the orchestra was fine.

The whole experience, the Gesamtkunstwerk, of The Ring in Erl was a delight. Many excellent singers, some great acting, some very effective scenery achieved quite simply, very good orchestral playing and the special visual and aural charm of seeing the pyramid of the orchestra behind the singers. The audience clearly loved it, as did we, and for us it was an unforgettable experience.