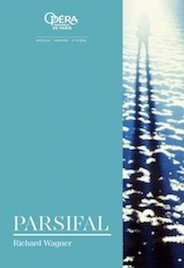 By Michael Chesterman
On 23 May, Colleen and I went without much foreknowledge to a new production of Parsifal by the National Opera of Paris at the Bastille Opera House. We are very glad that we managed to include it during our relatively short time in Paris.

The programme claimed that in this new production the director, Richard Jones, compares two illusory worlds: the ‘dogmatic’ world of the community of Montsalvat and the world of Klingsor’s ‘sexual hypnosis’. In my view, he did this very well, notably through giving considerable prominence to the attitudes and behaviour of members of the Montsalvat community. I do not know whether this constitutes a new and original approach to Parsifal, as I have not seen it staged very often. But the consequence was that the production was a good deal more successful theatrically than I expected.

In the scenery for Acts 1 and 3, Montsalvat somewhat resembled a downmarket boarding school for boys, of which Gurnemanz was the headmaster. There was a classroom of sorts, dominated by a large portrait of a man (never identified) looking vaguely like Billy Graham. Outside was a monumental statue of another unidentified man. On occasions, the huge stage revolved so as to reveal a structure rather like a stand for spectators in a downmarket football stadium. At different times, a number of novitiate monks adopted prayerful poses (around the statue) or sat dutifully alongside more senior monks in serried rows
(in the football stadium). But more significantly, they also pushed and shoved each other around when not required to pray or attend rituals; they harassed and abused Kundry during Act 1; and a large group of them violently thrust Amfortas towards the Grail during Act 3, ultimately knocking him to the ground. They often behaved like preppy college boys, despite a number of admonitions by Gurnemanz. The sterile nature of the community’s adherence to outworn rituals was wonderfully underscored by this depiction of most of its members.

At the beginning of Act 2, we saw Klingsor as a crazed scientist, conducting genetic experiments. The outcome of these was that the flower girls, appearing in serried rows in the football stand, included a number of plastic replicas of females prominently displaying raised legs with enlarged buttocks or genitalia. They also included a few members of the chorus, displaying enlarged breasts. Surrounding each of them were several large artificial petals. The lighting was in acid colours – yellow, lime green, even crimson at one point. When the flower girls, real and artificial, tried to seduce Parsifal by provocatively contorting their bodies and limbs, they could (with a stretch of the imagination) be conceived as lilies in full bloom being stirred up by a strong wind. After he rejected their advances they quickly turned into dead lilies.

Following this ingenious depiction of Klingsor’s world of perverse sexuality, the attempted seduction of Parsifal by Kundry was both dramatic and moving. This was chiefly due to wonderful acting and singing by Anja Kampe. First as comforting mother figure, then as dangerous seductress, she came across as sympathetic, even likeable, and above all human. One felt for her as well as for Andreas Schager’s  Parsifal. He was distinctly more vulnerable and impassioned than the Parsifal of Jonas Kaufmann whom many of us saw in the Concert Hall last year.

At the end of Act 3, after Parsifal’s appearance in front of the monks had halted their violent thrusting of Amfortas towards the Grail, Parsifal was not shown as simply taking over the reins as a new head of their community. If the portrait and statue that I mentioned earlier were to be interpreted (as Colleen and I surmised) as representations of prior occupants of this position, there would in the future be no such memorial to Parsifal. He in fact led all the monks out of the football stadium towards some new unspecified venue offstage. At this point he and Kundry has their arms around each other’s shoulders; however, the nature of their future relationship was also not specified.

The singing in this production was absolutely superb. A relatively young Gurnemanz, Gunther Groissbock, brought great power and dignity to the role. It was no surprise to us to read in the programme that later this year he will be singing Gurnemanz at Bayreuth and Fasolt and Hunding at the Met. Andreas Schager’s tenor voice was both rich and strong. Peter Mattei conveyed Amfortas’s pain rather too convincingly for the audience’s comfort, without sacrificing voice quality to any degree. Anja Kampe managed to maintain lightness and purity of tone through all the manifestations of Kundry’s elusive character.

The playing and singing of the orchestra and choirs of the National Opera of Paris was also first-rate. The same can be said of Philippe Jordan’s conducting, except that for my money his tempi were too slow, and the pauses too lengthy, in the first part of Act 3. After the drama and tension of the attempted seduction of Parsifal (an absolute highlight of the evening) and the defeat of Klingsor, this quiet section of the opera came over as more of an anticlimax than need have been the case.

To sum up, this was a musically excellent production of Parsifal, which despite its modern setting (in Acts 1 and 3) and the considerable enhancement given to the actions of the monks of Montsalvat remained entirely faithful to Wagner’s text. It did not use this text merely as the starting-point for excursions by a director (such as Stephan Herheim, whose production I saw at Bayreuth in 2009) into extraneous topics such as he favoured (e.g. the history of Germany since the late 19th century or the behaviour of Wagner and his family during or subsequent to his residence at Wahnfried). It offered instead a most illuminating account of the opera called Parsifal.