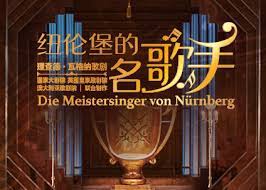 The Production and Conception

The whole concept of the work has been adjusted for this production. The story is set in the twentieth or twenty-first century, not the sixteenth. The focus is not the Mastersingers of Nuremberg but a contemporary club of Mastersingers.

The opening scene is therefore not a church, as Wagner intended, but a club, where the Mastersingers come to dine, enjoy themselves with the other members, and hold formal meetings. In the first act women accompany the Mastersingers when they come for the meeting, but withdraw when the meeting actually takes place. In the third act Hans Sachs’s studio is like a room in a contemporary run-down office. The final scene is the main formal annual event of the club. It is indoors and resembles more a graduation ceremony than a sixteenth-century midsummer meadow festival.

We are still confronted with the idea of art, and the role rules play in it. But there is more, because it is the whole contradiction between modernity and tradition that is under debate. When at the end, after winning the prize in the form of Eva, Walter rejects membership as a Mastersinger, he is actually refusing to join an old-fashioned club, one of the practices of which is to give away women as prizes. So Eva enthusiastically agrees with his decision to refuse membership, and shows it vehemently. When he finally accepts joining the club, she shows her opposition in quite clear terms, walking to the back of the stage in a huff.

Personally, I felt the new conception had a lot of sense, but I also felt confronted by some of its implications. Hans Sachs’s final monologue in praise of true German art is convincing to Walter, but this is a sexist club of which Eva disapproves. It left a bitter taste at the end. I’m used to the traditional idea that Walter and Eva are both delighted at their union and it’s a truly happy ending for them (don’t they both sing of their emotions so passionately in Act III both before and during the ecstatically beautiful quintet, “Selig wie die Sonne ”?). Holten’s ending was not only quite different from what Wagner intended, but totally inconsistent with the rest of the opera.

I found it offensive and out of character that Eva should suddenly be shown as a rabid feminist because Walter is willing to become a Mastersinger. It was like negating the heroes of the opera, who are the Mastersingers of Nuremberg.

In Act I, during the monologue of Hans Sachs’s apprentice David on the rules of the Mastersingers, he gropes one of the female club attendants and then makes an overture to one of the men. Both flee in shocked horror. It is tasteless and totally out of character to introduce our contemporary obsessions into this opera and apply them to the apprentice.

Costumes and Acting
The actors were mostly excellent. Apart from a few idiocies like the one just mentioned, American Brendan Gunnell acted convincingly as Hans Sachs’s apprentice David, though he looks a bit older and fatter than I usually imagine David. The standout for acting was German Jochen Kupfer as Beckmesser, who brought the role very much to life, including the general nastiness towards Walter and Sachs. If he had a fault it was that he looked too nice. In fact, he is tall and handsome and more like a suitor than the Walter, German Daniel Kirch, and towers over him when they are together. Danish bass-baritone Johan Reuter portrayed the wayward and thoughtful nobility of Hans Sachs very well indeed. Among the women, American soprano Amanda Majeski as Eva was mainly excellent. Not only does she look the part, very attractive with long fair hair, but until the end her acting was convincing, from the petulance she shows in Act II when she hears of Walter’s failure to become a Mastersinger, to her loving attitude both to Sachs and Walter in Act III. The final minutes when she changes her mind about Walter (and Sachs) because they are too politically incorrect I found so baffling and silly that I suspended judgment on her acting.

This production is set in contemporary times, not in the sixteenth century, and the costumes reflect the fact. Sachs usually wears the ordinary clothes of the modern European man. But there is also great complexity. The attendants/ servants in the club wear the clothes we usually associate with the exclusive club of the contemporary age. And on the formal occasions, the Mastersingers wear the magnificent robes appropriate to their status. Eva’s wardrobe is varied. Her white wedding gown as the prize in the last scene is quite magnificent and must have cost a fortune.

The Musical Performance
For me in Wagner, it is the music that matters most. I sum up this performance by saying it was mixed but dominantly very good indeed.

In charge of the opera’s musical side, Lü Jia (born in Shanghai in 1964) has an international reputation, especially in Italy, and is currently the chief conductor of the National Centre for the Performing Arts (NCPA) orchestra, established in 2010. Under his baton, the orchestra produced some very beautiful sounds and kept together remarkably well in the extraordinarily complex music near the end of Act II. There were quite a few places throughout where the singers were slightly out of time with the orchestra, but overall I thought they did an excellent job of this complex score.

Among the singers the standout was the Eva of Amanda Majeski. She has a truly lovely voice and her high notes were beautiful and steady. Her style everywhere matched her character and she sang the beautiful music from her entrance in Act III to the end of the quintet with a rare confidence and subtlety.

Hans Sachs is probably the longest and most demanding baritone role in the repertoire. Reuter has a nice voice and he generally sang in a style appropriate to the role. However, he was not always perfectly in tune and lacked confidence in places. On the first evening, but not the second, he broke down altogether for a few bars in “Aha, da streicht die Lene schon ums Haus”. Lü Jia guided him and the orchestra together again but it was definitely a moment of tension.

The Walter of Daniel Kirch was quite good, but I won’t go stronger than that. It’s not the most beautiful tenor voice I’ve heard and he seemed to strain quite seriously, especially in the high register. Fortunately, he rose to the occasion in the Prize Song, with a good smoothness and a ringing high note at the end.

Beckmesser was excellent, and able to create very good musicality from the rather thankless music that characterizes the role. I also admired Austrian Manfred Hemm as Pogner. He has a nice voice and sang the role of the rich and proud but in some way quite unassuming goldsmith with great humanity. Among the minor characters, the one that stood out for me was the nightwatchman of Act II. He doesn’t have much to do, but his music is very important, including the absolutely marvellous end of the act. Belgian bass Tijl Faveyts has a powerful and beautiful voice that made me think he could have done well in one of the major roles.

A few of the less important Mastersingers were sung by Chinese, as well as the apprentices, and chorus. They did well and I have rarely heard “Wach auf ” in Act III sung with such enthusiasm, passion and even grandeur. But considering this was an NCPA performance, Chinese solo singers were notable by their absence.

Chineseness
This brings me to the general subject of the Chinese context. Der Fliegende Holländer, Tannhäuser, Lohengrin, The Ring cycle, Tristan und Isolde and Parsifal have all been performed in China. However, as far as I know, this is the first time for Die Meistersinger.

For a start, the National Centre for the Performing Arts (NCPA) is a very modern building right in the centre of Beijing and beside the Great Hall of the People. Opened in 2007, the NCPA, is a truly wonderful place. As a frequent resident in Beijing I am a constant visitor for concerts and operas, both Western and Chinese. The Western media may be telling us that the Chinese government is against Western culture, but in terms of Western classical music I don’t see the signs of that. There are several performance sites in the NCPA, apart from the opera house. A French design, from the outside it looks like a gigantic egg, which is why many people call it simply “The Egg”.

Although the house was more or less full on both evenings, many people left after the second act. Of course, it’s a pity to leave early (as any Wagner lover can tell, the third is the longest but the best act). But apart from the obvious difficulty of getting home after the performance, I was struck by the significant number of children, and that may be a reason. I think it is a  good thing to take children to performances of Wagner (and other great music for that matter). Moreover, I had the feeling the Chinese audience was quite enthusiastic. I’ll also add that the Chinese chorus, dancers in “The Dance of the Apprentices” and club-servants were obviously enjoying themselves hugely, and I think it was the same for the orchestra.

I add a few minor points. My seat for the second performance was very good indeed and cost 550 RMB; that is about A$100. Every opera I have seen in the NCPA has translations. English is placed in bright and easily visible letters above the stage, and Chinese characters (going from up to down) on both sides. The managers judge, probably correctly, that these two languages will be known to the vast majority of the audience. The second, and totally unrelated, point is that a not frightfully appetizing roll and a bottle of water was provided free during the first interval. The performance began at 5:00, and both intervals were half an hour in length. There are two cafés where sandwiches, cakes, ice cream and drinks can be purchased at quite a high cost. The atmosphere of the whole place is excellent and I just love going there.

Conclusion
It’s a very old controversy to ask how much we can adapt great operas (or dramas) to the modern world. My general position is that I want it to retain as much of the original composer’s conception as possible. Applying that criterion to this production, I think Wagner’s story and conception makes more sense and is more emotionally satisfying than Holten’s, but after all he’s left most of the Wagner intact and the performance was good enough to make the show memorable. And the Chinese setting, with the overwhelmingly Chinese audience, in the heart of Beijing, was more or less unique. To see such a good performance of this great work in China was for me a profound and unforgettable experience.