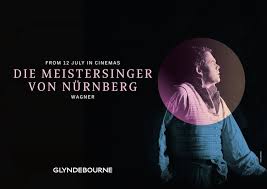 By Colleen and Michael Chesterman, Charles Manning
In June this year, Glyndebourne Opera in the Sussex countryside near Lewes opened its season with Wagner’s Die Meistersinger von Nürnberg. This followed a successful 2003 production of Tristan und Isolde, since the larger new theatre built in 1994 enables Glyndebourne to tackle such operas. So great was the enthusiasm that the opera was sold out to members before it reached public sale; Charles went with a subscriber earlier in the season and through obsessive persistence and many ‘phone calls we obtained tickets late in the season.

One of the strengths of Glyndebourne is that its in- house orchestra is the London Philharmonic conducted by Vladimir Jurowski, The musical direction was superb; dignified in the Prelude, but in the later acts full of emotion, emphasised by magnificent oboes and clarinets. The opening curtain that reproduced the first page of the Prelude underlined the centrality of music to this opera.

The opera was directed by David McVicar. We had seen his work only in cinemas (a brilliant Covent Garden Figaro, the Met Trovatore) and at the Proms (the GlyndebourneJulius Caesar). He is a director who avoids the imposition of a ‘konzept’; instead he distils the essence of the work and subtly enhances it.

The production did not remain in its 15th century setting. McVicar updated it to the 19th century, still placing it in the past but reminding us of the emergence of Germany as a nation during this period. The designer Vicki Mortimer presented a handsome vaulted canopy, which served as the ceiling of the church, a porticoed street, Sachs’ workshop and a bandstand in the final scene. The 130 strong crowd in this scene crammed the stage, indeed overcrowded it, with carnival acts, jugglers, unicyclists and children everywhere, but the overall effect was of midsummer jubilation. Rather than marching militaristically, the guilds had to push through the crowd, breaking off to greet friends and family; this added to a sense of celebration.

This gave enormous strength to Sachs’ last monologue. This production made it clear  that the driving force of the opera is the creation of a beautiful song, a blend of fine poetry and stirring music and that Sachs is talking about how this can be done. For him, German Art is holy; it can be under threat from external forces or thoughtless leaders, but can be protected by groups like the conservative Mastersingers. He is not saying that Germans should conquer other nations and become the master race or indeed conveying any anti- Semitic message. We have seen in the various iterations of Walther’s Prize Song that great art benefits from innovative creative ideas but is strengthened by drawing on the best of old traditions. In explaining this Sachs directed his speech to individuals in the crowd and among the masters, particularly Walther, trying to persuade them of this point, rather than giving it as a piece of demagoguery. It followed brilliantly the wonderful Schopenhaurean ‘Wahn’ monologue, in which Sachs renounces the folly and vanity of human striving and conflict as demonstrated in the street fight the night before (which itself was one of the most believable that we have seen).

McVicars’ major strength is encouraging the singers to create detailed characterisations. This had enormous benefits for this opera. Each of the Meistersingers was a distinctive individual; they formed factions and argued with each other. The longeurs of the first Act did not exist as you watched this group of men debating. Johannes Martin Kränzle’s brilliant Beckmesser was utterly believable as one of this group, just slightly more intense and neurotic than the others in his defence of the rules. Alastair Miles’ Pogner was a dignified, ponderous leader. The apprentices were well characterised, none more so than the gangling and stroppy David, beautifully sung by Finnish-West Australian baritone Topi Lehtippu. Eva (Anna Gabler) looked charming; Walther von Stolzing (Marco Jentzsch) presented well as a stiff and formal young man but as singers these two were the least distinguished.

The dynamic centre of the production was Gerald Finley as Hans Sachs. This is a younger man than we are used to seeing, thin, nervous and emotional, still suffering from the loss of his wife. His temper is volatile; he becomes irritated with both Walther and David. His attraction to Eva is absolutely believable and there is a real tension in their scenes together, wonderfully resolved in the last scene when she spontaneously takes the winner’s garland from Walther and crowns Sachs as the crowd celebrates his contribution to the city. Finley is not a tall man, but grew in stature as the opera progressed.

The joy for Wagner lovers in the UK was that Glyndebourne beamed the last performance into cinemas throughout the country, including a large screen in London’s Science Museum. For the following week it was also live on the Guardian’s web-page, where, from San Francisco, Colleen and Michael enjoyed seeing sections of the last act, beautifully filmed. We can but hope that an enterprising cinema chain brings it to Australia.