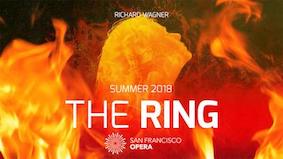 By Minnie Biggs
Not a ‘review’. Not a ‘critique’. Not a musical analysis. Just a personal love letter. From a modest, relatively young Ring virgin. Adelaide, Melbourne, Bayreuth, Met on HD.

This Francesca Zambello production was in many ways the most satisfying of all. There will always be details or aspects that grate, disturb or are just plain unpleasant, and at the same time, redeeming factors which lend to construct a whole opinion. This production had stand out details and literally no dramatically painful aspects. Which is saying a lot for a Wagner Ring.

The SFO orchestra was directed by their very own Donald Runnicles, (in charge of the SFO for many years.) He was received and applauded like a rock star, the orchestra was ....fine. I could not find fault but my recollection of the incomparable Bayreuth orchestra and the excellence of our Pietari Inkinen had more sparkle, more excitement. That they linger in my mind is what is most interesting while the Runnicles SFO does not.

The singers: Falk Struckmann as Alberich, a little weak starting out, came into his own, but “our” Warwick Fyfe is the Alberich of all time. A new Canadian Filipino friend agreed, so it is not just my own chauvinism! Stefan Margita as Loge was a great performer throughout, made me think of Fyfe, with his superb acting ability supporting his voice. Greer Grimsley started off Wotan a bit soft and weak- come to think of it, Irene Theorin as Brunhilde did the same thing! Both of them came very good to excellent. Brunhilde to great strength and beauty. (I wonder what that was about the production. Weak starts? Saving their voices?) Karita Mattila and Brandon Jovanovich were lovely as Sieglinde and Siegmund. Ronnita Miller as Erda was a fabulous personification of Erda, quintessentially huge round earth. I was not keen on her voice (which was given to wobbles which some people like.) David Brenna sang a fine Siegfried, a bit light, I wrote at the time. Andrea Silvestrelli as Hagen was brilliant in Gotterdammerung, such a bad man! Brian Mulligan as Gunter and Melissa Citro as Gutrune very fine.

I had some problem with the costumes, hair and makeup of Brunhilde and Gutrune at the end, looking as alike as they did, and suppose there was a reason for this which I missed, and which none of the seminars or talks mentioned.

All of my journal notes begin with “Beautiful”. “Wow!” “Fantastic. “Ahaaaaa....”

Beautiful was the first word describing the stunning visuals- video projections- created by S. Katy Tucker. The first, for Das Rheingold, smoky watery cloudy images moving and morphing on a scrim into almost recognisable pictures but not conclusively, for me absolutely in sync with the music, a perfect beginning. And then startled by the brilliant red sandstone cliff images moving around and down and down into the Niebelheim. She was inspired by the red desert of America and I could only think of our MacDonnell Ranges beyond Alice Springs, and also the descent into MONA in Tasmania! These videos started each act of the operas and were all stunning and moving and closely connected to the story location. The watery Rhine at the end became clogged with rubbish. The devastation of the world. Zambello was focused on the destruction of nature, the quest for power and corruption, based in America, familiar themes quite beautifully evoked in the projections.

While her vision is in line with Wagner’s purpose, and the visuals and the direction supported it, I wonder how much we as audience members take in, absorb his teachings? In many ways the end of the world seems even closer now than it did in his time, but have we learned? If we have accepted and understood, have we acted upon his lessons?

The light panels in the stage floor were an effective addition to the atmosphere, and much of the physical direction - the staging- was striking. The Valkyries standing in a straight line up some stairs, the set squared off to make an aesthetically satisfying picture. As was the Gibichung wedding, the arrangement of the chorus lined up, again using stairs and a squared off stage. Beautiful design.

One of the surprising turns of the production was the arrival of the Valkyries by parachute dressed like Amelia Earharts. (Actually they were stage hands in the parachutes crossing and descending to the stage and the singers came on packing their chutes. Clever.) They were carrying or connected to large photographs of actual dead American soldiers from several wars, (with family permission.) When I read about this before seeing it, was quite put off, sure I would not like it, but to my surprise, it worked really well. There was an understated subtlety about the old photos, real dead warriors.

The surtitles, a subject few have addressed- these were done by Zambello- left me with mixed reactions. While the story was made crystal clear, much of the dialogue was contemporised, sometimes dumbed down. I do not think Wagner would have wanted the audience laughing or giggling at jokes he did not make, or would he have?

And while we are on dumbing down, the woman who gave the pre opera introduction talks was a highly qualified musicologist and more. But she spent too much time making references to Harry Potter themes and other movie music being like leitmotifs, and went on about how the characters keep telling the story of what happened over and over. Really!

The talks and program articles by our Peter Bassett were informative and enlightening, and charming. And the symposium and forums by the SFO and Wagner Society of Northern California were excellent. There was a lot offered, all of it of the highest quality. There were twenty nine nationalities and people from 48 states. At the largest symposium the audience was made up of half brand- new comers, a good sign for the future. Altogether, a great success.

What struck me strongly is how much is new, how much more I learn and how much more I understand with each viewing. It seems truly extraordinary that there can be such profound insights, listening as new, as for the first time, to what sounds fairly familiar but with so much greater depth. I guess this is the essence of genius.