The Leipzig Ring Cycle, 2016 - Some thoughts 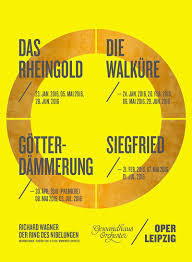 By Alviro Olave
What are we to make of the one who gets away from the flames consuming Valhalla and the Germanic gods and the rising waters of the Rhine flooding the rest of the world at the end of Götterdämmerung? The matter could have been easily solved had I dared to ask Rosamund Gilmore, the English Production Director, seated in the row in front of us. However, she left after the first curtain call at the end of the opera and I was not in the mood to ask questions following Brünnhilde’s farewell and the powerful music that closes the opera.

Ms Gilmore did not try to distort the opera’s time setting (except that the weapons held and used, besides Nothung and Wotan’s spear, are 1918 rifles and bayonets, or the knife used by Hagen to kill Siegfried), nor Wagner’s directions. There were only very few boos against overwhelming approval by the public. Instead, she used, in my view successfully, some ten ballet dancers and at other times additional characters, showing her background as a ballet dancer and choreographer who has worked most of her professional life in Germany. In fact, she started her career as a dancer with John Cranko’s ballet company in Stuttgart. These additions could be argued to have been distracting. I still remember a few years ago the comments made to me by a US gentleman attending Bayreuth. In his opinion, any gesture or movement by the singers diminished the quality of their singing and were distracting. To him the best way to hear the music and the singers was in an almost concert like performance.

The dancers represented throughout the performance some of the nature surrounding the main characters. For instance, at the beginning of Das Rheingold, they are the waves of the Rhine River (cleverly located on the edges a few meters above the area where the action between the Rhinemaidens and Alberich takes place). At other times they represent plants, at others animals like the ravens and Fricka’s rams. An actor playing Grane, as a living companion, was perhaps one the most interesting creations of the director. He was initially dressed in special shoes, which looked like hooves, and wore a saddle on his back. But once Brünnhilde lost her godhood, Grane lost the saddle and hooves. This was particularly poignant in the immolation scene.

One also wonders about the meaning of having Siegfried on top of a dead deer during the funeral march. Most importantly, why does the immolation of Brünnhilde, Grane and the dead Siegfried occur on top of a white piano?

The singing in general was quite bright, showing the breadth of talent available in Europe. Ulf Schirmer conducted the Gewandhaus orchestra to the expected standard of one of Europe’s best orchestras, maybe sometimes a bit unbalanced, but perhaps on purpose. The Leipzig opera house is not a large venue.

In closing and after some further thought, my guess is that the one who gets away is Loge. Gilmore makes him climb the stairs to Walhalla at the closing of Rheingold, contrary to Wagner’s words and directions. Is there a message?