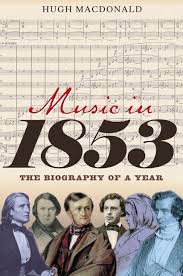 By Colleen Chesterman
This Boydell Press 1912 book is one of two books on music found by our older son at a Blue Mountains book shop and given to Michael and me as Xmas presents.

I thought this book might be of some interest to members of the Wagner Society, giving us a context in which we see Wagner operating as a musician. Macdonald is a Professor of Music at Washington University, St Louis. Essentially the book deals in a series of chapters with six significant musicians. It begins in April, 1853, as the nineteen-year old Brahms walks out of Hamburg, accompanied by a Hungarian violinist and nationalist Ede Remenyi. In London, Berlioz is facing a musical block after various failures. Liszt is in Weimar with his mistress, the severe Princess von Carolyne Sayn-Wittgenstein, but constantly encouraging young musicians and networking with senior composers. Wagner is in exile after the revolution in Dresden, but, after four years in Zurich, has developed a circle of other German refugees. Like Berlioz, he is not composing. Schumann and his wife Clara are in Dusseldorf, where he is composing and editing his influential journal Neue Zeitschrift für Musik. The brilliant violinist Joseph Joachim seems to know everyone and play everywhere. Around these six, many other minor cast-members appear and congregate.

Macdonald’s thesis is that at this time contact between people was dramatically improved. People wrote letters constantly and in many German cities there were five postal deliver ies daily. Macdonald has obviously drawn on this correspondence for the book. More importantly, the German rail network had been extended and connected to other countries, so concert engagements and tours were becoming much easier. This made possible the constant interconnections and meetings that become such a vital part of this book. Macdonald calls the book a "horizontal biography in music."

In looking at Wagner, Macdonald does not deal in any way with his music. This is partly explained by the fact that since Lohengrin was completed in 1848, Wagner had not completed any composition. Instead, he was producing a number of theoretical treatises and essays. These set out his conception of a new art-form, a radical transformation of opera, a different musical direction. He had also been drafting his long poems which eventually became the libretto for The Ring of the Nibelungen. Indeed, his first action in 1853 was to send his completed ‘poem’ to the printer.

In February, he read the whole work at Hotel Baur au Lac in Zurich to a group of friends, including the Wesendoncks and the revolutionary poet Georg Herwegh, over four consecutive nights. In October, he met Liszt in Basel with a group of young musicians, including Hans von Bülow, composer Peter Cornelius and violinists Joachim and Ede Reményi (or Eduard Reményi), who entered singing the King’s fanfare from Lohengrin. That night he read them Siegfried.

Liszt and a smaller party, including Princess Carolyne and her daughter, persuaded Wagner to come with them to Paris, where Liszt wanted to see his three illegitimate daughters by Comtesse Marie d’Agoult, including fifteen-year old Cosima. That night the party was joined by Berlioz, and after supper, Wagner read them the libretto of Gotterdammerung.

The description of this period in Paris gives a sense of intense socialising (the Wesendoncks also arrive) and of constant meetings between musicians and composers. Macdonald suggests even Meyerbeer, who presumably had not read Das Judenthum in der Musik (Judaism in Music). It also gives some idea of the rather gossipy anecdotal style of the events described and of the book. In his introduction, Macdonald says that ‘Biographers are rarely able to enter into the minutiae of daily life such as those I present here, whereas my aim has been to recapture the events of the year in as vivid a manner as possible.’ It certainly is entertaining.

Most significantly, it was on his return to Zurich from Paris that Wagner sat down on 1 November 1853 and began to write his evocation of the Rhine, the beginning of The Ring Cycle. It is a reminder of the importance of that river to Germans that in September young Brahms began to walk up the Rhine from Mainz eventually arriving on October 1 at the Schumann’s house in Dusseldorp. All in all, this book is an interesting survey of paths crossing and connections made.

The other book is even more interesting. Music as Alchemy by Tom Service (Faber & Faber, 2012) analyses the relationship between six great conductors and their orchestras. As it does not really discuss Wagner, here I must stop.