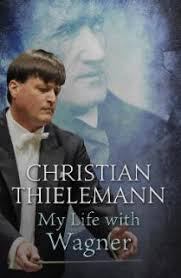 Distinguished Wagner conductors rarely write books with a total focus on the composer. Both Daniel Barenboim’s A Life in Music and Zubin Mehta’s A Memoir are autobiographical. Christian Thielemann briefly mentions his childhood and early training, but then progresses to Wagner. An international publisher would retitle the book as “The Book of Bayreuth.” This book is based on conversations that took place between August 2010 and July 2011 in Bayreuth, Berlin, Salzburg, and on the Attersee with Christine Lemke- Matwey (p 252). For the purposes of publication in English, references are made to the latest (2015) Bayreuth production of Tristan und Isolde.

The book is recommended for all Wagner and other classical music lovers. The published text is chatty but requires close concentration. Christian Thielemann brings forth valuable insights. At the same time he discloses many amusing incidents stemming from Bayreuth. It is unclear why the movie director Lars Von Trier accepted but then withdrew from directing a new Ring cycle. However, Christian Thielemann provides an example of the infamous movie director behaving strangely, difficult and eccentric. The author accompanies Wolfgang and Gudrun Wagner to Copenhagen to discuss a proposed Ring cycle production. Lars Von Trier suddenly stands up, tears off his clothes and invites them to swim with him in an icy pool. So much for his proclaimed understanding of the Ring as “a great theatre of illusion” performed in “an atmosphere of enriched darkness” (p 110). On the other hand, Lars Von Trier states the Last Word: “If we want Wagner, then Wagner is what we want” (p 95).

The book is in three sections: a brief outline of his early career followed by in-depth descriptions of Wagner’s Cosmos and Wagner’s Music Dramas. As befitting a serious conductor the first chapter of the Cosmos details The Wagnerian Orchestra, Words and Music and The Subjects.

A photo shows the Bayreuth Rogues’ Gallery. Here photo portraits of veteran Bayreuth conductors are displayed in this area. The author gives a potted history. For example, Anton Seidl (1850 to 1898) conducted The Ring 135 times mostly with a Touring Wagner Company. Can you believe—135 times? Your reviewer has walked down this hallowed hall and remains convinced that Bayreuth has a flair for contracting outstanding conductors. There have been very few duds but the challenges of conducting from the pit are formidable. For example, Sir Georg Solti politely left.

There is an extensive section on the composer’s hostility towards Felix Mendelssohn covering material unknown to contemporary Australian readers. Christian Thielemann says “Wagner did lasting damage to Mendelssohn’s reputation” (p82). He describes it as “character assassination, and it had consequences” (p85). The obvious consequence was fuelling the blatant anti-Semitism of the time. The National Broadcasting Symphony Orchestra was founded in Sydney in 1932. The reviewer has been unable to locate the programs to see exactly which compositions of Mendelssohn were played. Sir Eugene Goossens, appointed to the renamed Sydney symphony orchestra, certainly scheduled and recorded Mendelssohn works. For that reason this chapter section on Wagner and Mendelssohn is “news” to some of us.

WHAT MAKES A GOOD PERFORMANCE?

The architectural element, mastering the conducting of opera on the grand scale, reading Wagner, directing, singing, interpretation.... In an ideal world conductors and performers of Wagner operas are fluent in the German language. The American soprano Deborah Polaski said that a deep understanding of the language was a prerequisite to singing the notes. She sang Brünnhilde at Bayreuth under James Levine—he conducted long before Christian Thielemann’s arrival at Bayreuth.

WAGNER FOR BEGINNERS: AREN’T WE ALL?

The third section is Wagner’s Music Dramas. Here Christian Thielemann discusses each opera by Origins, Cast and Orchestration, Plot, Music and Recordings. His analyses are stimulating and informative. Their length is adequate for the task of informing the reader and opera goer of the basics. Hardy literates can progress to detailed, scholarly works. Even the famous Grove Dictionary entries are merely a stepping point.

The author devotes one paragraph to the cinema. We learn that Erich Wolfgang Korngold starred in a Hollywood biopic of Wagner, Magic Fire (1955, directed by Wilhelm Dieterle) as the conductor Hans Richter. Thielemann omits to tell us that, in addition to acting, Korngold scored Wagner’s music for the soundtrack, earlier on he scored Mendelssohn’s music for A Midsummer Night’s Dream also directed by Wilhelm Dieterle in Hollywood. William Dieterle directed a silent biopic of Ludwig 11, King of Bavaria, in 1930. Luchino Visconti explored the relationship between Ludwig II and Wagner in greater depth in 1972. Thielemann as a performing musician does not address this historical side of Bayreuth’s foundation. There are many more visitors to Ludwig’s castles looking at frescoes and painting of scenes of Wagner’s operas than listeners in the Festspielhaus performances.

Thielemann does not address the new phenomenon of watching Wagner operas on DVDs, Blu-Ray discs and internet streaming. For those of us who are not fluent in the German language watching surtitles in German and/or English is a big bonus to our understanding an appreciation of these master works. The audience sitting in the Bayreuth theatre may be privileged, but there are no sub/surtitles and certainly no air conditioning. The author discloses that renovations in the 1960’s make the installation of air conditioning “impossible.”

On the other hand, his selection of historic recordings is endlessly fascinating. He draws our attention to many worthwhile performances. Many of these are from non- Bayreuth opera houses. Toscanini is one of the first legendary Bayreuth conductors to record a complete opera. The only recording of Toscanini conducting a complete Wagner opera comes from the 1937 Salzburg production of Die Meistersingers von Nurnberg; the music was recorded on Selenophone a film soundtrack medium. Even after Ward Marston’s remastering the sound is disappointing. Toscanini’s Bayreuth performances are discussed on pages 46-47. Toscanini’s portrait is beside that of Furtwangler in the Rogues’ Gallery. Karl Elmendorff conducted an abridged Bayreuth Festival recording of Tannhäuser in 1930. Otherwise, Karl Muck and Siegfried Wagner recorded only short excerpts from Bayreuth. A Naxos CD includes theParsifal bells that were melted down in World War 11.

Thielemann’s “desert island” Ring performance is Furtwangler conducting in a Rome radio studio in 1953. Martha Modl sings Brünnhilde; there is a touching photo of her with the conductor in the year 2000. She died in 2001.The selection of photos is surprisingly diverse but includes Wieland Wagner’s production of Parsifal in 1951, the centenary Patrice Chéreau Ring in 1976, as well as Hans Neuenfels Lohengrin in 2010— yes, the one with colourful rats. Bayreuth productions are a workshop in progress. Katharina Wagner is determined to push audiences way beyond their comfort zone. Unfortunately, there is a shortage of opera directors, set and costume designers able to satisfy and bring to stage life her vision.

The 2006 Tankred Dorst and Ursula Ehler directed Ring Cycle was a major disappointment in respect of a “workshop in progress.” The directors took no chances to improve the interaction between the characters (p109).

Bayreuth remains a mecca for outstanding conductors. My Life with Wagner was first published in the German language in 2012. Christian Thielemann as of June, 2015 has a new title Musikdirektor which has been created especially for him. The bonus is a car parking space at the Festival Theatre. In Germany that is a big deal.