Review: Wagner operas in the US and Germany, May 2016 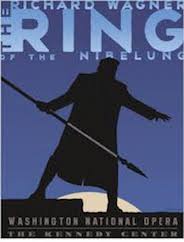 By Colleen and Michael Chesterton

A naked young woman wanders across the stage. Some sailors seem to hassle Isolde. Perhaps it is a drug rehab centre, this guess is borne out when Tristan and Isolde shoot up the potion. By the second act, more people are walking around, inside and out. On stage left, a well-hung, naked, young man is digging a hole in soil. Will the coffin go into this We booked with a group of Wagner Society friends to go to Francesca Zambello’s Ring of the Nibelungen in Washington in May 2016. We had seen the operas in 2011 in the first showing in San Francisco and had found it very satisfying. The cycle was meant to show in Washington in 2014, but the budget for this was not available. In Washington, we selected the third cycle, when the role of Brünnhilde was sung by Nina Stemme, whom we had seen in San Francisco. She is still the best exponent of the role. We booked through the Kennedy Centre Box Office, which offers parties of 12 reduced tickets. Three of our seats were A reserve, all others B, but they were excellent in view and sound.

Zambello had designed it as an ‘American’ Ring. Rhinegold begins during the gold rushes, Alberich is presented as a forty-niner. In Valkyrie, we are in the 1920’s, and the Valkyries are presented as young Amelia Earharts. By Siegfried, we enter the world of the dispossessed, with Mime and Siegfried in a battered caravan in a forest. Götterdämmerung is set in the world of the wealthy financiers, shallow and corrupt.

Another significant theme is the relationship between man and nature, which he carelessly destroys though greed. Throughout, projections illustrate the implications of this wasteful destruction as forests become industrial furnaces and splashing waterways are covered by detritus.

Overall, it remains an excellent Ring, particularly Götterdämmerung. The power of the main players was evident from the beginning. The Rhinemaidens sang beautifully, teasing Alberich, played by Gordon Hawkins, a powerful bass. The role of Wotan was played by Alan Held, tall and dominating, with Elizabeth Bishop as his wife Fricka. The gods entered Valhalla as if they were embarking on a magnificent cross-Atlantic liner. In Valkyrie, the first act was beautifully performed by Christopher Ventris as Siegmund, Meagan Miller as Sieglinde, and Raymond Aceto as Hunding–all strong performers. However, Nina Stemme’s appearance in the second act dominated all, as she teased her father and demanded that he assist Siegmund. But, the resistance put up by Fricka was strongly presented and the murder of Siegmund in a wasteland under a highway proved inevitable. The Valkyries were powerful as they alighted like aviatrixes, but left Brünnhilde to Wotan’s punishment. In Siegfried the setting was bleak, a wasteland with a battered caravan. David Cangelosi as Mime is a comic clown, with an evil streak, but he dominates as he jumps on the roof of the caravan at the end of Act 1. Daniel Brenna is a relatively new Siegfried, but his voice has much promise and his youthful looks and energy are very welcome. His meeting with Brünnhilde was well realised. Finally, to Götterdämmerung, one of the most satisfying operas we had ever seen. The Gibichung siblings were all impressive; Siegfried maintained his boyish aggression and Brünnhilde sang with wonderful power as the ring was destroyed. It was a magnificent end.

After a week touring the north eastern states galleries we flew to Munich for the Bavarian State Opera’s production of Die Meistersinger. We had never been to this beautiful opera house and indeed were lucky to get tickets through friends. We were keen to see Jonas Kaufmann as Walter, which was indeed deeply satisfying as his voice and interpretation were very strong. But, the direction of David Bösch was deeply disappointing. The opera was set in the 1950’s,Walter wore a leather jacket, David rode a moped, Pogner drove a car, Sachs’s workshop was in a food-truck and the apprentices used baseball bats to beat up Beckmesser in Act 2. The singing, including Kaufmann, the impressive Wolfgang Koch as Hans Sachs, Benjamin Bruns as David was of a very high standard. Kirill Petrenko conducted brilliantly driving the orchestra to absolute power.

The next day we flew to Berlin for the Deutsche Oper Tristan und Isolde. We had not read reviews of this 2011 production, instead attracted by its cast, Nina Stemme as Isolde, Stephen Gould as Tristan, Matti Salminen as King Marke. All sang well. But, the production, by English director Graham Vick, apparently booed on premiere by the audience, was nothing less than appalling.

The set was a room with a central window and rooms on the sides. It is crowded with suburban furniture–leather lounges and there is a closed coffin. People sit in the furniture; one turns out to be King Marke. People wander about in the first act.? By the third act, the cast had gone grey, so many years have passed. Some of the walls are of stone. Tristan is wearing a velour dressing gown, and walks out of the middle window. Isolde, in a beige twinset and brown check skirt, arrives too late. Nina Stemme’s Liebestod was magnificently sung, but I had my eyes closed. Donald Runnicles conducted well.