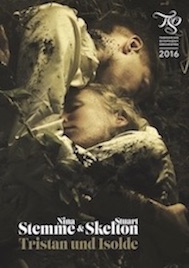 By Colleen Chesterman
On the night of 19 November 2016, a packed audience in the Federation Concert Hall in Hobart heard Swedish soprano Nina Stemme and Australian tenor Stuart Skelton perform an abridged concert version of Wagner’s magnificent Tristan und Isolde under the baton of Marko Letonja, conducting the Tasmanian Symphony Orchestra.

“My host at dinner that evening was Marko Letonja, the principal conductor and musical director of the Tasmanian Symphony Orchestra, and the other guest was the maestro’s  agent from Zurich, Rita Schütz who is also Ms Stemme’s agent. I became unusually excited and proposed an exclusive Australian debut by Ms Stemme in Hobart. And as she was scheduled to sing Isolde with the Australian heldentenor Stuart Skelton at the Metropolitan Opera in New York, it seemed like a good idea that they combine with the TSO in a concert version of Wagner’s great romantic opera.”

Read Leo Schofield’s full account of his role in this coup, go to: http://tasmaniantimes.com/index.php/article/tristan-und-isolde-#sthash… for 5 April 2016.