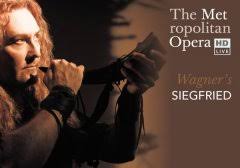 This is the third instalment of the new Ring at the Met. Götterdämmerung premieres in January, followed by complete cycles in April/May 2012.

Bryn Terfel gave a formidable interpretation of the Wanderer as an angry but not bitter old man, cynical but not world- weary. His confrontation with Alberich was superb: the contrast between light- and dark-Alberich accentuated. Terfel’s voice has darkened and deepened over the years, and, with more depth and subtlety of characterization, he has the potential to be a successor to James Morris in the role.

Erich Owens was a strong Alberich and Gerhard Siegel a suitably scheming and devious Mime. Patricia Bardon sang well as Erda; König and Erdmann were also good in their respective roles.

Jay Hunter Morris may be remembered in Sydney as a very good Pinkerton [on DVD with Cheryl Barker]. I have also seen him as Walther in San Francisco. His voice is solid but not powerful, a pleasant tone with a nice legato. He also acts very well with a boyish charm, and in these roles the combination has been enough to provide good interpretations. However, the voice lacks colour variety, and as Siegfried he became more boring as the opera progressed. The turning point was the forest murmurs scene, which requires fine shading and use of a wide colour range, all lacking. However, as the Met’s 4th choice for the role – Ben Heppner was originally scheduled, but vocal problems and poor reviews at Aix have led him, wisely, to withdraw; the role was then scheduled to be shared between Gary Lehmann and Stephen Gould, but the former withdrew for some unspecified illness, whilst the latter was not available – one should be generous, and give him a B+ for (almost) making it through to the end.

So, the above list sounds like a respectable performance, and indeed, if the curtain had come down after the Wanderer’s departure in Act III, one would have rated the whole performance as reasonably good.

The conducting was fast, and superficial rather than exciting. Indeed, the conductor seemed so desperate to get to the end of the opera that he ignored a disturbance in the auditorium (described below) to start Act II. By the end he had managed to shave a full 30 minutes off the running time. The Met orchestra seemed grateful for the early night, as they managed to keep together and play quite well.

The production made extensive use of the “machine” now familiar from the cinema showings to project variously the murky undergrowth, the forest and the rocks surrounding Erda’s cave. The dragon was less scary than an average Disney film, just a neck and head that swayed around a bit. All Siegfried could do was run back and forth below the head until the moment came to stab it in the neck. Copying Chéreau, Fafner was re-transformed back into a giant after being stabbed, which thankfully removed the dragon. The production didn’t add a great deal, was overly literal at times – Sieglinde giving birth was unpleasant, the child Siegfried running across the stage unnecessary, whilst a projected fluttering Woodbird will become irritating with repeated viewings. As with previous instalments the machine severely restricted the available stage space.

Worse, the machine completely malfunctioned after Terfel’s exit. First, the lift placing Brünnhilde in position failed to operate, so she had to walk on stage, past Siegfried tactfully looking the other way, until she reached the middle of the stage, when she lay down, waiting to be woken. Fortunately most of the audience did not quite grasp what was happening – she covered her face and hair so she might have been another Walküre, perhaps Waltraute, offering some guidance [perhaps I shouldn’t give directors out there any ideas] – otherwise laughter would have descended.

Secondly, the machine became stuck, including the light projections, so that, instead of a view from a mountaintop, Brünnhilde and Siegfried met, conversed, and embraced whilst menaced by a wall of fire.

There was once a soprano called Deborah Voigt, who had a promising career ahead, singing a superb Sieglinde as well as other dramatic roles, and a fine Marschallin. However, she had a tendency to be put on weight. She lost the role of Ariadne because the director insisted the interpreter wore a “little black dress”. She decided to diet, which didn’t work, and finally resolved on a “stomach- stapling” operation to solve the problem once and for all. Whilst successful for the weight, the lack of support for the voice started to cause vocal problems. Unfortunately she tackled heavier roles such as Senta and Tosca, which, combined with this lack of support, caused the voice to deteriorate further. She is, of course, repeating the history of Maria Callas. Contracted to sing in La Sonnambula at La Scala, and fearing ridicule due to her large size (her friend the director Visconti proposed to dress her in a Swarowski necklace to distract the audience) Callas went on a crash diet. Within 10 years her career was over. Whilst unwilling to predict an unhappy ending for Miss Voigt, suffice to say that she is now loud, harsh, and at times piercing. She is developing a nasty wobble  and scoops occasionally. She attempted a trill which fell flat. I have no desire to hear her sing again.

A couple of final remarks. Whilst the Met cinema broadcasts no doubt give pleasure to many people, anyone attending the Met should beware any broadcast performances. There are 9 cameras in total, 2 on the level of the Dress Circle looking down, 2 on the sides on large booms which swing around distractingly, 2 at the front of the aisles, and 2 on the sides (about 1/3 of the way back). And finally, a small “rabbit” that runs on a track at the front of the stage to take close-ups. It is impossible to sit anywhere in the theatre without being distracted by at least 1 camera movement, and I would estimate at least 20% of the seats have their performance ruined by the more intrusive cameras. Moreover, any potential attendee should be aware that, not only is the above true for the broadcast performance itself, but also for the one preceding, no doubt to provide backup footage in case of problems.

Obviously there is a balance between the needs of the general public and those in the theatre, but it seems to me that Mr Gelb has gone much too far in one direction. Other houses are cutting down on these experiments, or at least investing in modern cameras which are more discreet. Those in Vienna are at the side of the stage and about 8” in diameter, whereas the Met seems stuck with 1980s “big is best” technology. It seems incomprehensible why the cameras are not restricted to the dress rehearsal and the Saturday performance. In any event, attend the Met with foreknowledge, or risk a ruined evening.

Finally, on returning to my seat in the middle of Row B, the elderly woman in the aisle refused to stand when requested, instead suggesting I sit somewhere else. She only stood up when I politely insisted, and then subjected me to a stream of four-letter f- abuse. The man whose seat was next to mine was directly behind the conductor in Act I, and was hoping to take one of two empty seats in the front row. When the couple returned to take their seats at the last minute, he had to get past that woman as the lights went down. She absolutely refused, and screamed abuse at him, whilst the conductor came in, took his bow, and started Act II. She continued this for about 30 seconds, before giving in, and letting him take his seat. This disruption ruined the start of Act II for much of the audience.

When I went to complain to the stage manager in the interval, I was preceded by a queue of people asking to change their seats because they couldn’t see due to the cameras. This Ring is cursed.