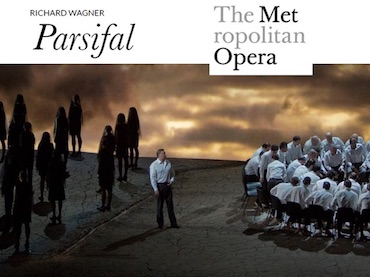 By Max Grubb
I attended the last three performances of a new production of Parsifal on 2, 5 and 8 March, 2013. The first performance on Saturday 2 was a live relay to the Ziegfield Cinema on W 53rd Street and the final two performances in the ‘house’.

Production and set design by Canadians Francois Girard and Michael Levine respectively replaces the conservative and visually beautiful one by Otto Schenk first staged in 1991. The opera is set around the sanctuary of the Knights of the Holy Grail in the mythical location of Montsalvat somewhere in Spain during the Middle Ages., but the new production places the opera in an indeterminate time frame. The costumes of the men are black trousers and jackets with white shirts and the women white gowns. The only concession to medieval imagery is the golden Grail and the spears carried by the knights. The set design uses the latest visual technology for back projections, in particular swirling clouds in Acts 1 and 3 and changing images of the world. To some extent this production recalls images of some of the ‘neo Bayreuth’ productions of the Ring by Wieland Wagner in the 1950’s and 1960’s and that by Francesco Zambello for the 2011 Ring in San Francisco, whilst the changing images of the world owes much to space movies such as, 2001, Star Wars and Star Trek. What is old is new again - the wheel turns!! There are some stunning visual images: in Act 1 a brown arid stage bisected by a shallow gully which runs with blood, in Act 2 the blood red floor of Klingsor’s castle, and finally Act 3 when Parsifal returns to a desolate Montsalvat where the stage looks like a dark monochrome Hieronymus Bosh painting.

Singing was of the highest order from a superb ensemble cast. In the title role German tenor Jonas Kaufmann was excellent, his vocal production thrilling with clarion tone trumpeting into the auditorium over the thundering orchestra as well as hushed pianissimo that one could hear throughout the house. Arguably he is the best heldentenor to grace the Met stage since Lawrence Melchior in the 1930’s and 1940’s, notwithstanding Jesse Thomas and James King in the 1960’s and 1970’s and Placido Domingo in late 1980’s to 2009. Kaufmann certainly has an arresting stage presence. In Act 2, when the Flower Maidens ripped off his clothes, and Act 3, when Gurnemanz removes his shirt to cleanse his body, Kaufmann revealed a very trim, muscular body for a male opera singer in his mid-40’s. You could hear the matrons in the house having an attack of the vapours.

Katarina Dalayaman played Kundry at the Saturday simulcast, Michaella Martens replaced her at Tuesday’s performance, with Dalayaman returning for the final performance on Friday. Dalayaman was in excellent form on the Saturday and still seemed to be suffering from a cold on the Friday. Michaella Martens made an impressive debut in the role on the Tuesday, but her vocal production was not as smooth as that of Dalayaman and she tended to lunge for the top notes in Act 2. Rene Pape as Gurnemanz sang beautifully and with great authority, demonstrating his position as the leading German bass of his generation, although lighter in tone than his predecessors in this role, such as Gottlob Frick and Josef Greindl. Peter Mattei as Amfortas sang superbly and with great intensity and the assumption of this role was surprising as I have heard him previously only in Rossini and Mozart roles.

The evil Magician Klingsor was sung by the excellent Russian bass Evegny Nikitin. Indeed, his portrayal was enhanced by the presence of tattoos on his arms, hands and neck and I thought this to be part of his ‘shtick,’ only to be told by the Canadian sitting next to me that his whole body was covered with them, including some with a Nazi swastika, which, when viewed in rehearsal at Bayreuth in 2011, led to his withdrawal from that house’s production of Der fliegende Holländer.

The orchestra of some 120 players produced a beautiful luscious sound. The style of the music is almost liturgical with the use of bells, gongs and offstage and onstage chorus, whilst the pace is processional. These characteristics probably explain why the length of performances can vary between four and four and a half hours, some conductors, such as Wilhelm Furtwangler and Herbert von Karajan, erring on the faster pace, whilst James Levine, Danielle Gatti and Asher Fisch (the latter two who conducted the current offering) paced the music much more slowly - some four hours and forty minutes, plus two half hour intervals - making for a long afternoon and two long evenings.

The differences between seeing the opera as a high definition broadcast in the cinema and in the house itself can be best appreciated when seen consecutively in their respective locations. Most new productions at the Metropolitan Opera, Covent Garden, La Scala and the Paris Opera are designed with the intention of simulcast relays to cinemas and later release on DVD and Blu-Ray, and as such can recoup the outlays from lavish production and casting. The simulcast offers greater immediacy to the action in terms of close-ups to the singers, indeed sometimes too close. However, this reinforces the drama, but at the same time this is often at the expense of obtaining an overview of the stage.

For an opera house of the size of the Metropolitan Opera, with a seating capacity of just under 4000, the sight lines and acoustics are remarkable. However, the experience in the house still determines where you sit and what patrons are prepared to pay. In the house the best view of the stage is in the first twenty rows of the centre stalls ($360 a seat), but the sound is slightly muted. The front of the Grand Tier ($360 a seat) and Dress Circle ($170 a seat) offer excellent views of the stage and superior sound in terms of balance between orchestra and singers, whilst the Front Balcony ($100 a seat) offers even better sound, but is a long way from the stage. At the simulcast I noticed a slight harshness in the sound and have noticed this in other simulcasts here in Australia. On DVD and Blu-Ray however the sound is far superior to that experienced in the cinema and I look forwards to its release, particularly on Blu- Ray. The sound in the theatre is much warmer and nuanced and the impact of loud passages much greater, particularly in the entry of the Knights of the Holy Grail in Acts 1 and 3, where the sound was thrilling and almost blew one out of the theatre. To this extent the high definition broadcasts offer an alternative opera experience. However, at an average cost of $29, the cinema offers great accessibility and affordability to the highest standards of performance for the public at large. At last count, the Metropolitan Operas were streamed into over 1800 cinemas throughout the world and the box office takings for Parsifal grossed $1.6 million in North America alone (New York Times, 15/3/2013).