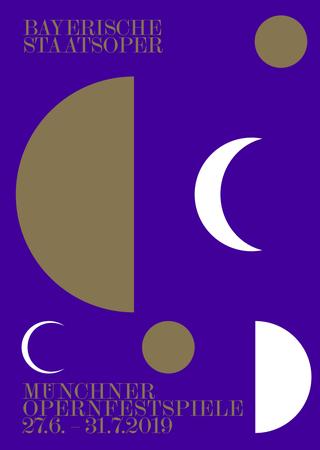 Viewed from the middle of the stalls (Parkett), the conductor could be seen quite clearly, adding an important detail to the entire experience. The non-traditional setting is of a backstreet neighbourhood of suburban grey and dowdy apartment blocks and a small square in 1960’s Nurnberg. This required quite an adjustment to my expectations.

The setting included Hans Sachs’s workshop as the “back of a truck” parked in the side of the small square. In the course of the evening all kinds of vehicles provided distractions to the “action” of the opera. Motor cars, pushbikes, motor bikes, wheelchairs, fork-lift as well as a police patrol car and a limousine all contributed to the time-warp situation contrary to the expectation of the traditional setting.

The disappointment of a late cast change, the result of the indisposition of Jonas Kaufmann also created a new perspective. The substitute Walter von Stolzing was played by German singer Daniel Hirsh, a newcomer to the role. His introduction to this production required rehearsal interruptions for fellow performers in order to accommodate the late change. Occasion uncertainty of stage placement and the co-operation of other performers created a degree of uncertainty. The Chorus of the Staatsoper under the direction of Soren Eckhoff brought the stability of solid reliability and pleasure especially the offstage contribution at the beginning of Act I.

Sixtus Beckmesser, as usual, is portrayed as a pedantic, unco- operative, bungling, pitiable character. He bears the brunt of all, despite the alleged objective towards achievement of a unified goal of communal harmony in respect of perfection of an admired formal art form. Here played by Martin Gantner in a fairly youthful manner, using a ukulele rather than a lute to accompany his mostly misdirected singing, despite being the “marker,” he who best must show and know the rules and the craft of good singing in conformity for Mastersinging trials. His victimisation and brutal physical abuse at the hands of David as well as the crowd of brutish onlookers, surely could only be suggested by Wagner in a most indirect way. Here the direction is overdone.

The female roles in this opera are very subservient and type-cast with the main contributions of Eva and Magdalene being their parts in the famous and most beautiful quintet in Act III with Stolzing, Sachs and David. This was achieved by all contributors gaining top marks. As usual, the Hans Sachs, here played and sung with paternal warmth by Wolfgang Koch, brought together all protagonists with compassionate and well-respected avuncular strength. Even his 1960’s style, now thinning, long hair, was to-day almost anachronistic, but was appropriate for the period of the setting of this production.

The ugliness and clutter of some aspects of this production (reminiscent of the Castorf Ring of past years in Bayreuth) together with the distracting video images in many scenes made this viewer yearn for a more traditional representation along the lines of Wagner’s wishes. As it turned out, despite mostly above average singing and acting, this performance, in delving into a mid-20th century West-German setting seemed anachronistic and contrived.

This occasion was planned to be the highlight and goal of my 2019 European travels. Unfortunately, the opportunity to see Jonas Kaufmann as Walther von Stolzing in his hometown, Munich, was too good to be true. As it proved to be. Happily, those at home in Sydney who had the chance to see him in performance a week later, in Sydney, as Andrea Chenier had better experiences.