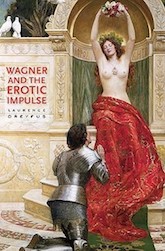 Both books are packed with interesting observations about and insights into Wagner’s attitude to that very large subject: Love. Dreyfus, perhaps wisely, limits to the “erotic” his analysis of Wagner’s ideas, the reception of Wagner’s ideas and his artistic portrayals of love, and the actual embodiment of those ideas and attitudes in his artistic works. However, your review came to realise that “erotics,” too, has its definitional problems, of which more shortly. Emslie, in contrast, specifically eschews any attempt at or need for a definition, because, from his loosely post-modern perspective, definitions already pre- suppose a knowledge or understanding of that which is to be defined. Instead, Emslie opts to evolve an understanding of what love meant to Wagner, in all its glories and inadequacies, by teasing apart his inconsistencies – in his life and his art. Emslie explicitly denies that he seeks to “explode” the subject into its multifarious and inconsistent, even incoherent, bits and pieces.

However, from your reviewer’s perspective, both authors’ analyses suffer from a lack of clarity about what it is they are analysing. The lack is less problematic in Dreyfus’s book, because “erotics” is a somewhat more limited subject than the “love” that Emslie aspires to analyse, However, even Dreyfus is prompted at times to conflate categories, as when he observes that “most writers have steered clear of tackling what has long been blatantly obvious—that Wagner was the first to develop a detailed musical language that succeeded in extended representations of erotic stimulation, passionate ecstasy, and the torment of love.” Here we are already offered three descriptions of “love” that may or may not be mutually exclusive: Dreyfus does not sufficiently differentiate, although one quickly picks up the drift through his account of the reaction of people to the incest, the implied sexual acts, the seductions, indeed the sheer physicality of many of Wagner’s “love” scenes, accompanied by music specifically constructed not just to underpin the emotions entangled in such scenes, but to enhance even stimulate those emotions in the auditor-viewer.

Fortunately for his account, he clearly but briefly explicates the views of Feuerbach and Schopenhauer on “love” and “sex,” who both have distinctive understandings of the subjects and both of whom were important influences on Wagner. There isn’t space to detail these influences, but one of Feuerbach’s effects is evident in Wagner’s celebration of the body in all its “natural” activities and its unity with the spirit (or Geist in the German Idealist conception). Schopenhauer’s very frank (for his times) account of sexuality in many of its forms also reinforced Feuerbach’s influence. However, Dreyfus, as does Emslie, neglects to investigate the influence of Schiller, Friedrich Schlegel and Novalis, among others of theFrühromantik school. Emslie, for his part, either ignores the significant influence of German Idealists, such as Fichte and Schelling, or dismisses the influence of Hegel, for instance, with throw-away comments, when, in fact all three are crucial in shaping many of Wagner’s views, well in advance of Feuerbach or Schopenhauer.

However, Dreyfus’s account would have been strengthened by a clearer appreciation of Wagner’s idiosyncratic view of love and sexuality. On 25-26 January 1854, Wagner had written to his Dresden friend August Röckel about the true nature of love, as part of a disquisition on the nature of eternal truth and reality:

...the full reality of love is possible only between the sexes; only as man and woman can we human beings really love, whereas all other forms of love are mere derivatives of it, originating in it, related to it or an unnatural imitation of it.... The highest satisfaction of individual egotism is to be found in its total abandonment, and this is something which human beings can achieve only through love [sex]: but the true human being is both man and woman, and only in the union of man and woman does the true human being exist, and only through love, therefore, do man and woman become human.... Thus only reality is eternal, the most perfect reality, however, comes to us only in the enjoyment of love; it is thus the most eternal of all sentiments. – Egoism, in truth, ceases only when the “I” is subsumed by the “you”.... [Spencer and Millington,Selected Letters of Richard Wagner, pp. 303-04].

In view of Wagner’s explicit views on sex, “erotics” may be an inadequate term to use. Indeed, had the book been entitled “Wagner and Sex,” the argument might have been clearer and truer to Wagner’s personal beliefs that heterosexual, procreative sex is the benchmark for judging all human inter- subjective relations.

“[The musician] therefore caused insatiable yearning...to swell upwards in a long articulated breath..., through anxious sights, hopes and fears, moans and wishes, joys and torments, until the mightiest blast..., the most violent effort...to find the rupture which unlocks for the boundlessly craving heart the path into the sea of unending sexual bliss” [p. 103]. In discussing this passage in relation to the music [pages 104-110], Dreyfus points out aspects of the music to listen for and references a set of musical examples at the back of the book. Dreyfus observes, that reading the program note “alongside the music, it is difficult to avoid that impression that Wagner has devised a musical depiction of a male sexual fantasy moving in waves of arousal toward an explosive climax. Whether the great moment is meant to have occurred through self-stimulation or purely as an erotic fantasy in the mind is naturally left unsaid” [p. 105]. As further illustration of the link between “erotic” content and the musical language, Dreyfus gives us a nuanced bar by bar analysis of the construction of the Prelude and the status of the leitmotifs within its structure. These analyses for most of the mature works, is worth the price of the book.

Emslie, in contrast, is attempting to deconstruct the “mess” of Wagner’s thinking and art practice and its products, he focusses on what he sees are the cracks and lacunae in Wagner’s thinking in general (of which there are many), and his ideas about “love” and the ways he embodies this amorphous and endlessly shape-shifting concept in his art-works. There is no doubt that Wagner was not a systematic thinker, and so it is easy to point to inconsistencies in his philosophising about the nature and purpose of “love.” Ironically, though, Wagner’s conception of “love” is based firmly, if perhaps mistakenly and narrowly, in its manifestation as heterosexual, procreative sex. Taking that as Ariadne’s thread through the labyrinth of Wagner’s philosophising, as well as into his unconscious desires and fears, would have given Emslie’s book a clear focus and benchmark against which to assess Wagner’s ideas and the characters in his art-works, as they grapple with the difficulties of loving and being loved, rather than berating Wagner for his changing usages and inconsistent terminology. That is not to say that Emslie does not discuss Wagner’s views on sexuality; rather, that he does not seem them as an underlying principle in his theorising and his art-works.

If Emslie’s strategy was to enable the reader to re-construct an understanding of what “love” meant to Wagner and how he portrayed it, the strategy did not work for this reviewer, who was left contemplating the deconstructed Wagnerian landscape and wondering about the point of the exercise. It may be timely and relevant for a critic to dismantle common assumptions or beliefs about Wagner and his status as a systematic thinker and a creator of self-coherent music-dramas, but Emslie rarely tells us why he bothers. What is it about Wagner that keeps his interest long enough to deconstruct his heritage? Part of the answer may be that it is the work of a professional teacher of deconstruction theory and techniques, as Emslie appears to be, to undertake such work. This situation might also account for the dry tone and density of argumentation.

While Dreyfus does not explore the philosophical and literary influences on Wagner’s conception of “love” in the detail that Emslie deploys, they both focus on Schopenhauer’s shaping influence on Wagner’s music-dramas. However, it is precisely on the point of love, as a philosophical question, that Wagner rejects Schopenhauer. Instead of the Frankfurt pessimist’s belief in a blind, irrational, purposeless Will to Exist, which affronted Wagner’s Romantic sensibilities, Wagner evolved a conception of what can be called a Will to Love, in which that emotion is reified to the driving force of the universe and most evident in the Verklärungen of Tristan und Isolde and the experiences of Siegfried and Brünnhilde, and to a lesser extent Walther von Stolzing.

Because Wagner was influenced from a very early age by the views of the Frühromantik movement (1790s-1820s) about sexuality and the status of women, including the need to reunite sex and love, that is the body and the spirit or Geist, and he was clearly a highly sexed man, Wagner’s understanding of human love also demanded that sex (again heterosexual, procreative sex) be considered as intrinsic to “true love.” This is why it is very clear that Tristan and Isolde have been regularly having sex in the garden until the night that King Marke’s unexpected return precipitatescoitus interruptus. From Wagner’s theoretical perspective, this is a rupture in the fabric of the Will to Love that sustains the universe, and it is not healed until Isolde experiences her dying Verklärung. For such views, Wagner was indebted to Schiller, Friedrich Schlegel and Novalis.

Emslie’s book is roughly two and half times longer than Dreyfus’s and more densely written (and in smaller print), so it is by far the more challenging read. However, there is much in Emslie’s book that sheds light on Wagner’s mode of thinking – a very spontaneous and evolutionary one – and the inconsistencies that such a mode invites.

Dreyfus books is very easy to read and highly amusing as we read, disbelievingly at times, some of the clap-trap that was written about Wagner’s medical and psychological “conditions” by medical doctors, psychiatrists, self-appointed protectors of public morals etc, and congratulate ourselves on our more enlightened views. The receptions history makes the book almost worthwhile, although the explication of the “sexiness” of the music is also valuable.

In both cases, the books would have been improved in your reviewer’s estimation, if they had taken Wagner’s lead and made sex unambiguously their guiding thread and linked his varying ideas about love, pity, compassion, passion and friendship to our sexual urges. Wagner’s rather pragmatic attitude to sex – that it was a “natural” urge – led to his fairly relaxed attitude to the many homosexual men (and some women) among his circle and their physical relations, although he hounded them all to marry and procreate so that they could, like him, be what he termed “purely human.” Dreyfus, indeed, devotes a whole chapter to this interesting aspect of Wagner’s complex character.

Your reviewer can recommend both books, but, given what has been written above, the books are likely to appeal to different readers. Both books are available from InBooks, which is also offering a special deal on the Dreyfus book.