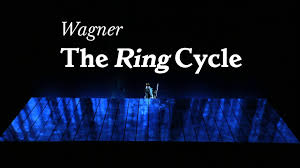 By Terence Watson
I won’t go into detail with the production, because many of you will have seen one or both of the HD broadcasts to cinemas from the Met Opera. The main pleasure was the singing and, surprisingly, the acting, given that there was little acting in the earlier broadcasts. Bryn Terfel has really taken over the role of Wotan and seems to be taking pleasure in giving us his idea of how a god might act (in spite of his silly costume and wig!). His singing matches the subtlety and variety of his acting – or is it vice versa? He wasn’t afraid to growl, howl, bellow or sing lyrically as the moment demanded – often all together, as when he unburdens his soul to Brünnhilde in Act II of Walküre. He brought out the emotional, loving side of Wotan much more than any other portrayal I’ve seen. He wasn’t afraid to show vulnerability or fear and often reached out to touch a loved one, pulling back at the last moment – out of fear or pride? His scene with Erda in Act III of Walkürewas one of the most physically intimate moment he allows himself to have with anyone, except the dying Siegmund, and of course the banished Brünnhilde. He was a joy to see and hear.

Despite her size and lack of physical agility, Stephanie Blyth was impressive as Fricka, with enormous power for Wagner’s coloratura demands on her in Act II of Walküre. Unfortunately, Jonas Kaufmann was ill, so he was replaced at very short notice by Frank van Aken as Siegmund. There was some sentimental compensation in that Aken is the husband of Eva-Maria Westbroek, the Sieglinde, and was only in the audience to see his wife sing, so the Met had the first husband and wife team ever playing the two characters. It added some intimacy to their acting, but Aken’s voice was not big enough for a huge house like the Met and he was soon struggling. I was glad that I had decided to go to the Walküre from the 1st Cycle to hear Stuart Skelton who was mightily impressive, as well as Voigt. In both cases, Westbroek was a joy to hear and watch as well – a complete singing actress.

Another, somewhat less disappointing, replacement was Richard Fink for Eric Owens as Alberich in Götterdämmerung. However, even though Fink walked through the role (since he came in at short notice as well), he sang very well. Katharina Dalayman was a mixed bag – a nice rich, warm middle register, but her higher register tended to a shriek whenever it was under pressure (which is a lot of the time). However, her acting was more spontaneous than Deborah Voigt, who, I think, spent a lot of her time making sure that her voice was going to hit the right note with good quality and so her acting was somewhat understated. So, a combination of the two would be ideal – sounds a lot like Nina Stemme!!

Jay Hunter Morris in real life matched up with his performances in the HD broadcasts. He is remarkably convincing as Siegfried, making him the most credible I have ever seen the character portrayed. He has an easy stage presence, warm rapport with his Brünnhilde, and athletic agility in moving around the Machine. His voice held out all the way through Act III of Siegfried and he made all of the terrible high notes in both his operas bar one when he cracked a little. What he lacks at the moment, but should be able to develop as he matures, is more colour and variety in his voice. Given that he hadn’t sung the role before the San Francisco Ring last year, he has achieved a great deal already. Let’s hope he doesn’t burn out before he achieves his potential.

I should also mention Eric Owens as Alberich in Rheingold, who magnificently reprised his scene-stealing performance from the HD broadcasts. He will be well worth a ticket to Sydney Symphony’s Der fliegende Holländer next year.And also Hans Peter Koenig as Hagen – wonderfully sardonic and almost gleefully manipulative, with a wonderful rich bass. All the other performers were more than creditable in their roles, which is the least one could expect from one of the major opera houses.

Which brings me to the Machine! It was less noisy than I had feared, but still creaked a lot and occasionally planks stuck. However, what was less obvious in the HD broadcasts are the stage pictures that the Machine is capable of generating. At its best, such as the monumentally intimidating (even Fascist-like) concentric orange circles of the Gibichung palace, or the stream and forest scenes of Siegfried, or the magic fire, or (one of my favourites) Wotan raising the earth out of the ocean at the beginning of Act III of Walküre, or the cascading streams of Rheingoldand the Rhinedaughter scene in Götterdämmerung, the Machine enables projections of great beauty and subtlety. At other times, such as many of the transitions scenes inGötterdämmerung, the abstract patterns being projected (borrowed, it seemed, from the iTunes or Windows Media Player visualisation patterns) seemed to be designed only to fill in the blank planks, because no one could think of a dramatically relevant image to use. Sadly, Robert Lepage chose not to remove the sillier elements of his conception for the full Cycles: Fricka’s ram chair, the Valkyries’ wooden plank horses, the mechanical horse, the funeral pyre, the exploding heads of the statues of the gods, etc. Despite the barrage of criticism the production has received, Lepage and Peter Gelb have defended his “interpretation” as one of the greatest!!

In passing, I saw the Met’s production from 1978 of Billy Budd, which also employs an impressive “machine:” a full size ship cut through the middle so we see a cross-section of the upper, main and lower decks. Part of the deck moves up so that we can enter Captain Vere’s cabin. When the ship attempts to engage the French warship, the whole set rises up so that it seems to fill the entire proscenium of the Met’s stage – truly awe-inspiring – and then the cannons actually fire! When the scene of Billy’s incarceration in the bilge arrives, the set again rises to its highest extent to  reveal Billy chained in the cramped space way way down below the main deck. This set demonstrated to me how a truly ingenious solution can be found for demanding dramatic situations. Lepage could learn a lot from the set designer William Dudley. The cast was very impressive: Captain Vere: John Daszak (a superb voice – a true lyric tenor, not the strangled English tenor of Peter Pears), Billy Budd: Nathan Gunn (the production was revived for three performances just for Gunn’s debut in the role – like Jay Hunter Morris, almost ideal for the character), Claggart: James Morris (his voice a little worn after years of Wotan, but the raggedness seemed appropriate to the evilness of the character).

Finally, it was interesting listening to the orchestra and its conductor working its way to a new soundscape for the Met Ring that is quite different from the heavier, more traditionally “Germanic” style of Levine. Fabio Luisi has also re-arranged the orchestra in the pit into a more conventional European pattern, with the brass on stage left and divided strings, so unlike with Levine sitting down, all the orchestra can see Luisi. While this probably leads to some imbalance down in the stalls, in the Grand Tier, where I was sitting, the sound had blended beautifully. I felt that, by the middle of Siegfried, they had reached a consensus on the sound they wanted, that was more in keeping with the approach of Boulez and others recently at Bayreuth: less emphasis on the brass, more attention to the inner voices, greater clarity overall. One curious thing I noticed – or it seemed to me – that Luisi had to slow down the orchestra during a number of the scene transitions to accommodate the slowness with which the Machine changed its configuration – something that I’m sure didn’t happen with the Billy Budd scene transitions that were so smooth, quick and seamless with the action.

Overall, I was disappointed with the Machine; it seemed to impose more limitations than creating opportunities. It reduces the stage to the front half, although it also usefully functions as a sound board for the singers most of the time. It sometimes changes configuration with miraculous effect, but many other times it moves perfunctorily and distracts from the performers, although most of them seemed to have adjusted to moving around on the Machine when they had to. Terfel and Hunter Morris were the most athletic in moving over it. Indeed, Terfel seems to have lost quite a bit of weight, without it affecting his voice.

Another annoying feature of the production that reflects poorly on Lepage as director is his clumsiness in getting his performers on and off stage; so many times the characters just mosey on off into the wings or, in clear sight of anyone above the stalls, walk up or down steps or ride a lift up or down behind the Machine creating many little anti-climaxes and very dated, mechanical entrances or exits that are not integrated into the drama. It seems that, having committed to the Machine, any other dramatic element has to take second place to its demands. This all seems to suggest that the Machine doesn’t really solve many technical problems of performer placement and movement, especially when compared to the effectiveness of the Billy Budd set.