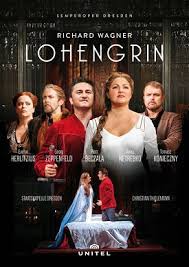 This opening night on 19 May 2017 was eagerly anticipated by opera fans, particularly Wagnerians. Several years ago the famous Russian soprano Anna Netrebko announced that she had always loved Wagner, and that it was her ambition, when her voice was ready, to tackle a Wagnerian role. Netrebko began her career more than 20 years ago in light high soprano roles (Lyudmila from 1995 is available on DVD); we [Richard and partner Camron Dyer] first saw her as a sparkling Nanetta in 2001. Since then her voice has darkened, added power and richness, and most recently has sung Lady Macbeth and Leonora in Trovatore. Netrebko is notably respectful of her voice, and despite a wide repertoire over her career, has only undertaken 2 or 3 different roles at any time, suitable for her instrument as it develops. This approach has led her to withdraw from contracted roles—Marguerite a few years ago, most recently Norma—when she has considered, on beginning study, that the role no longer fits her voice with the perfection she requires. So tension prior to this opening night was electric, anticipation heightened by Facebook postings of rehearsal clips by Anna, and by the news that secondary market ticket sales were at multiples of face value. In honour of the importance of the debut, Dresden had arranged a strong cast, headed by the Polish tenor Piotr Beczala, famous in the French and Italian repertoire, also making his Wagnerian debut, with Christian Thielemann generally regarded as the greatest living Wagner conductor, and a famous and beautiful production.

Netrebko surpassed expectations, providing a superbly detailed interpretation, gorgeous rich colours, long long Bellinian lines conveying sincerity. She portrayed a guileless, warm-hearted visionary, desperate for affection, with a superb gradual breakdown under the psychological torture of the repeated interruptions to the investiture-wedding ceremony in Act II. Netrebko never held back, with full voice throughout, an astonishing achievement. She never took her eyes off the conductor whilst singing, but astutely integrated this into her performance, adding to her slightly other-worldly appearance.

Beczala also used beautiful long phrasing to denote sincerity, and employed his rich, warm colour to portray a Lohengrin ethereal, slightly aloof, uncomprehending of Elsa’s need for affection and understanding. He was noticeably careful with his voice in Act II, saving it for a superb rapt narration in Act III. Konieczny had a slightly forced tone, but gave a convincing and detailed portrait of a restless, reckless, ambitious military leader, morally corrupt through choice rather than weakness. Herlitzius had a harsh but strong, clear if cold voice, with a strong characterisation of a conspiring, crafty, morally repugnant, ruthless witch. Never has the derivation of Telramund and Ortrud from the Macbeth pair been clearer. Zeppenfeld acted well but was a bit underpowered, Welton was a strong Herald, with a richer characterisation than usual as a military deputy commander.

Thielemann has a very personal style with Wagner, intensely beautiful with dramatic tempo shifts within the overall arch of a strong dramatic structure. Some passages, such as the Elsa-Ortrud embrace were taken exceptionally slowly, others, such as the opening bars of Act II, swiftly. His approach is particularly effective in Lohengrin, which, apart from a short passage in Act I, is entirely in duple and quadruple time, mesmerising but at risk of dullness. Perhaps a parallel is the subtle rubato familiar in Chopin, but on a much larger scale. Highlights included the intensely clear rich polyphonic lines of the overture (Wagner arranged Palestrina for Dresden whilst writing Lohengrin), a thrilling Act III prelude and the spatial effects in the interlude before IIIii. The famous Dresden Staatskapelle created a particularly rich tapestry of sound.

Lohengrinhas suffered undeservedly cruel treatment from directors in recent years, from stylised hieratic fixed gestures (New York), a grotesque menagerie of exotic beasts (Vienna), a fratricidal psychopathic Elsa (Berlin), a Turettish tomboy with a building fetish (Munich) to industrial lab rats (Bayreuth). In Dresden the famous, beautiful traditional production dates from 1983, 2 years prior to the reopening of the Semperoper—at the time the company performed in the nearby State Theatre. The costumes were rich and elaborate, at times opulent, as in Act II, when Elsa wore a gold dress on entrance, later overlaid with a long purple train and an ermine stole. The swan boat was a gigantic Swarowski-style crystal.

As with all traditional productions, the adherence to Wagner’s stage directions (no recent opera director appears to understand the words “the curtain rises”) allowed for particularly rich and detailed characterisations, with many subtle ideas not previously encountered. Elsa was blindfolded during the combat, heightening tension. During the Act I narration, Telramund constantly stretched his hand towards the ducal coronet, displayed veiled on the stage. When Telramund contradicted himself during his testimony (he first states he rejected Elsa’s hand in marriage, then a few minutes later states that she refused him), several nobles, obviously disgusted at his lies, stood up and tried to leave. Telramund emphasised Ortrud’s barrenness and deceit in promising him an heir. When Elsa appeared on the balcony in Act II, Telramund was drawn to her purity and goodness, and stayed to watch Ortrud expose herself as a witch: this made clear Telramund’s conscious moral choice for evil. The familiar problem in Act II of too much music for the procession was solved by Elsa first leading the procession into the church on the right for a blessing, then recrossing the stage to the left for state certification as duchess (Gottfried being presumed dead?), then reassembling in the middle for the investiture with the ducal coronet. This ensured that the climax of the procession, and Ortrud’s interruption, occurred when the cardinal was about to place the coronet on Elsa’s head, and provided a convincing psychological explanation of why Ortrud loses her temper at that moment. When dealing with Ortrud’s increasingly outrageous accusations, Elsa was physically encumbered by her train and stole, and finally discarded both to confront Ortrud. When Telramund appeared in the bedroom in Act III, Elsa guided Lohengrin’s hand on the sword, thus providing their first moment of physical unity and joint action immediately after she, by asking the forbidden questions, has caused them to part. Gottfried, appearing at the end, was immediately invested with the robe of state and sword, charged with “leading” his Brabant army, whilst Elsa became irrelevant to the political-military crisis, and collapsed, simultaneously with Ortrud, the latter’s plans foiled.

Lest those who prefer concept-productions feel short-changed, there were some Marxist touches to satisfy them. A worker broke Telramund’s sword at the end of Act I. The women were silent spectators of the Act I court proceedings behind a wall, then burst in during the swan chorus. The power games of a militaristic society had no place for the people and their needs, personified by Elsa. The peasants, with their instinctive and correct moral judgements, recoiled from Ortrud.

Greeted with prolonged applause after each act, and a 15-minute standing ovation at the end, this famous evening was marked by the city with a lengthy fireworks display above the Elbe as we exited.

So why is this performance so important? Having listened to 20 different recordings made over the last 65 years, and many other interpreters of the role (including Flagstad and Sutherland), in my opinion Netrebko provides an unrivalled depth of interpretation, as well as richness and beauty of colour and line. If Netrebko is singing Elsa, and you have a chance to see a performance, then whatever the sacrifice (even, to quote Bernard Levin on the Goodall Mastersingers, selling your grandmother to a white slaver), hesitate not.