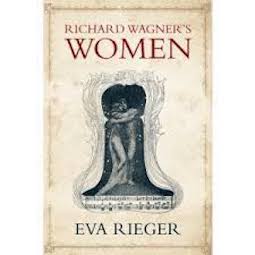 In the newsletter of March 2012, the Editor highlighted publication of a new book Wagner and Women by Eva Rieger. He asked any interested member to review the book and I put up my hand. Interestingly, a review is timely now as it has been announced that Professor Rieger is one of the international speakers at the seminar Wagner & Us to be held at Melbourne University from 6 to 8 December 2013 in conjunction with the Melbourne Ring Cycle.

Professor Rieger is an Emeritus Professor of Historical Musicology at the University of Bremen (and from the evidence of the photo on the back cover a ‘cellist). The book was originally published in German in 2009, and has been beautifully translated into English by Chris Walton. Rieger situates herself from the first page as a ‘feminist’, but emphasises her distance from early feminist writings of the 1970s, which both sought ‘lost’ women composers and criticised ‘misogynistic’ works of art. She recalls that Wagner was seen as ‘the worst of them all’ particularly in the light of his subjugation of Cosima Wagner, described in her then recently-published diaries. Nonetheless she acknowledges that his music remained compelling. So over 30 years later, Professor Rieger has produced a book that attempts to analyse Wagner’s engagement with women. In doing so she argues for the importance of investigating not only Wagner’s works, both theoretical writings and music, but also the tremendous changes taking place in the society in which he lived and from his ideas were formed. Antony Ernst focused on the impact of such changes in his recent workshop.

Central to Rieger’s thesis in this book, however, is Wagner’s ‘eventful’ life and the significant role played by his three central relationships, with Minna Wagner, Mathilde Wesendonck and Cosima Wagner, all of them related to his need to have devoted attention. She also describes numerous affairs reflecting his powerful sexual drive. She presents sympathetically the development of his marriage to Minna, his initial passion for her, the atmosphere of the theatrical communities leading to his flirtation with ‘free love’ and Minna’s growing desperation at Richard’s extravagance and inability to establish a settled life. She describes the depth of his love for Mathilde and how it was sublimated because of their decision not to consummate the relationship. She suggests this had a critical impact on his depiction of Brünnhilde and particularly Isolde, who express desire that Rieger says was ‘openly revolutionary’ (p. 83).

Rieger analyses the representation of gender differences in characters and the way Wagner’s music reflects these – from quite simple examples in instrumentation (aggressive brass for males, melodic woodwinds and harps for women) to more sophisticated treatment of the conflicts experienced by his female characters in attempting to reconcile the clashing societal constructions in which they operate.

Wagner was driven by a wish to find his ‘ideal woman,’ to give him care, inspiration and redemption, a role fulfilled by Cosima. Rieger suggests that Brünnhilde is little more than the will of Wotan on one hand and as a loving woman little more than a redeemer (p. 164-7), as ‘idealisation brings with it degradation’. Yet she implicitly contradicts this description by talking about the power in Brünnhilde’s arias, ‘large leaps, great intensity, compelling declamation’ – power which I believe we feel in our bodies during the great final arias of both Isolde and Brünnhilde. Indeed it could be said that Brünnhilde, by throwing the ring away and flinging herself into the fire, creates the conditions for a new society, one not dominated by power and is therefore the active element in the denouement.

I have another problem in Rieger’s analysis, which is her use of essentialist notions of masculinity and femininity, particularly when she discusses the ‘femininisation’ of male figures. She suggests Siegmund abandons his role as a ‘hero’ because of his love for Sieglinde and his resulting ‘feminisation.’ She also suggests that Wagner, suffering the loss of Mathilde Wesendonck, approvingly presents Hans Sachs renouncing his relationship with Eva, though this leads to him becoming ‘feminised.’ Surely, however, the later scenes of Die Meistersinger demonstrate that Sachs’ renunciation is based on strength; the Wahn monologue is a powerful denunciation of society’s delusions and the praise of Sachs by the townsfolk construct him as a powerful and influential figure, encouraging new models of culture. Rieger could abandon such rigid interpretation of gender roles, which make some of her interpretations overly mechanistic, and develop a more nuanced understanding of the fluidity and ambiguity of the categories of ‘masculine’ and ‘feminine,’ a feature of recent feminist scholarship.

In an interesting coincidence, 2011 also saw the publication of another book on Wagner and women, Vocal Victories by Nila Parly. This differs in significant ways from Rieger’s book as it does not look at any biographical details, instead focusing on an analysis of Wagner’s major female characters, in terms of the plots and libretti, but most particularly in an analysis of the music. This is detailed and full of information in that Parly was a trained opera singer before entering academe.

I found two things problematic with this book. First, it is Parly’s Ph.D. thesis and shows this background by a lengthy analysis of the ‘literature.’ As the thesis was presented in 2006, it does not deal with Rieger’s book; but as the latter was published in German in 2009, it is a shame that some consideration of it could not have been included in the book, as it would have been an important source. Second, the tradition of theses means that discussion and rebuttal of other theoretical positions is very thorough, making the book rather longer than it needs to be.

Importantly, however, Parly’s training as a singer gives her great traction in analysing the effect of the music on listeners. She argues that Wagner’s leading female characters create and shape the most significant music. This goes beyond what she analyses as the ‘conjuring’ skill of Senta and Elsa in dreaming (creating, singing) their ideal heroes. The major female characters shape the stories because of the strength of Wagner’s vocal writing for them. Parly is excellent in identifying a musical motif that creates or strengthens an overall development in the opera, in particular the powerful catharses of Isolde and Brünnhilde. For example, in discussing the Liebestod and what Wagner called its ‘endless melody,’ Parly quotes Wagner’s fascination with Bach’s use of polyphony in creating this effect. Parly passionately argues that Isolde is not suffering, but controlling the music, the leitmotifs and the resolution.

The overall structure of the book is odd, in that within each chapter, chronologically dealing with the ten major operas, Parly presents her own interpretation first, then summarises other theorists, criticizing their views, then provides a closer- knit analysis. Often the analysis of the music is separate, quite detailed and not integrated. Unfortunately, I do not read music and therefore found it rather difficult to appreciate long sections analysing Wagner’s leitmotifs and musical patterns. But despite the repetition I would recommend this book to those who have these strengths.

These two books make important steps in Wagner research and enable us to see how his theoretical works, libretti and music combine to present an important step forward in seeing how his female characters contribute to his overall creation of musical masterworks that still speak so powerfully to us.