I heard third-hand, a few months ago, that Joseph Ferfoglia had died. I met Joseph and his second wife, Judy, through the Wagner Society, and we became good friends in a period late in their lives, before the slow descent into old age shut them off from the world. I thought I should gather together some of the fragments I recall of Joseph (and Judy), in a vaguely chronological order, so that they weren’t lost, at least for a little while. 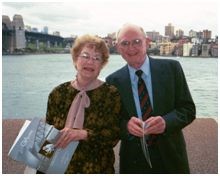 Judy and Joseph at the Opera house for the farewell concert
for Maestro Cillario, on 23 March 2003