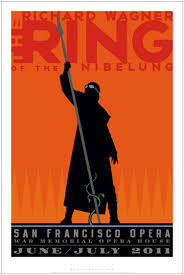 By Max Grubb
The west coast of the United States has been alive to the sound of Wagner’ Ring over the last three summers with respective productions at Seattle (2009), Los Angeles (2010) and San Francisco (2011). Having attended all productions, I think it is worth drawing some brief comparisons. Simon Wandsworth’s Seattle production, termed the ‘Green Ring,’ was “inspired by the natural beauties of the forests and mountains of the Pacific Northwest”, Achim Freyer’s, dubbed the ‘Star Wars’ Ring, stressed ‘timelessness’ evoking futuristic images, using hand-held batons to simulate lasers and geometric images of circles, lines and spirals on a steeply raked rotating disc to evoke another time and place. By contrast, Francesco Zambello’s San Francisco Ring is termed the ‘American Ring.’ It encompasses the whole American continent and unfolds in chronological sequence commencing with the Californian ‘Gold Rushes’ of the 1850’s and concluding with the end of the twentieth century. There is much to like in this production. The text in the surtitles is updated to reflect contemporary American vernacular and there is extensive use of moving back projections, particularly in the orchestral preludes, to set the geographical context, not dissimilar to those used in the 2007/2008 Valencia Ring staged by La Fura Dels Baus, but without the acrobatics.

The first half of the opera is set at the time of the ‘Gold Rushes’ and the second in the 1920’s or 1930’s. Alberich is a ‘miner 49er’, the giants Fasolt and Fafner miners labourers demanding payment of their wages (specified in their contract to be goddess Freia), Wotan as a duplicitous CEO seeking to break the contract for the construction of Valhalla and who employs Loge as a ‘hot shot’ lawyer to find loopholes in it. In the latter half, the gods Donner and Froh are depicted as spoilt preppy college brats with their Ivy League monogrammed blazers. The gods enter Valhalla drinking champagne as they walk up the gangplank, which is raised, leaving the Rhinemaidens at its foot as creditors, waiting for the return of their gold.

The singing overall was very good, but with some reservations. Outstanding singing from Stephen Magrit as Loge, but Mark Delavan as Wotan lacked the mellifluous tone and power of Bryn Terfel at the Met earlier this year and Greer Grimsley in Seattle, and, whilst stretched, rose to the occasion in the final scene. Elizabeth Bishop as Fricka was similarly lightweight, lacking the vocal heft that Stephanie Blythe brought to this role in Seattle and the Met. As Alberich, Gordon Hawkins sang well, but needed a much darker voice.

Iconographic images of the American landscape using moving aerial shots of mountains, canyons, deserts and forests were projected during the preludes to the three Acts. Act 1 is set in a woodsman’s hut amongst Californian redwood forests, Act 2 Scene 1, Valhalla is a corporate boardroom looking out over New York in the 1930’s, which is represented in the form of a silver gelatin photographic image, and Scene 2 is set under a derelict freeway, which is a dumping ground for old cars. I doubt that freeways were built prior to the national freeway building programs initiated by the Eisehower administration in the 1950’s, let alone there being derelict ones at the time. However, it probably serves as a metaphor for the announcement by Brünnhilde of Siegfried’s imminent death. In Act 3 the Valkyries drop as parachute troopers into a valley near Valhalla.

The stars of the evening were American tenor Brandon Jovanovich as Siegmund, Nina Stemme as Brünnhilde, followed by Anja Kampe as Sieglinde. Jovanovich is making the transition from lyric to heldentenor. He produced fullbodied singing with a ringing top, good legato and wonderful soft singing. This is a voice to watch and his career appears to be following a similar trajectory to that of Jonas Kaufmann. Nina Stemme making her debut in this production as Brünnhilde arrived in Act 2 looking like Queensland Premier Anna Bligh taking charge of flood relief after the February floods. She produced a good top C for the battlecry and the often omitted trill, producing fullbodied warm tones in the following scenes with Siegmund and Wotan. She is probably the best exponent of this role at the moment, and her singing reminded me of that of the young Astrid Varnay, a Swedish predecessor, as heard in recordings made in the mid 1950’s, particularly the Keilberth Ring from Bayreuth in 1955. Anje Kampe gave an impassioned performance as Sieglinde, particularly in Act 3. She continues to improve in this role since I heard her in this role at Los Angeles last year. Elizabeth Bishop sang a powerful Fricka and was a great improvement from her essay of this role inRheingold. As Wotan, Mark Delavan gave a creditable performance, but, as in Rheingold was overparted for the role and tired in Act 3. Similarly, the Australian bass Daniel Sumegi disappointed as Fafner in Rheingold and, as Hunding, continued to disappoint - the voice was not there.

The orchestral preludes were accompanied by projection of 1950’s images of America during the 1950’s, beginning with the forests in Act 1 and Acts 2 and 3 taking us with the Wanderer (Wotan) in search of Siegfried on a railway journey with a diesel-hauled locomotive carrying timber milled from the forests, past factories, some of which were abandoned, and power plants connected to the electric grid. In Act 1, Mime’s cottage is a plywood caravan parked amongst the redwoods and Act 2 is set in an abandoned factory littered with disused car tyres, car seats and oil drums. The giant Fafner is encased in a robotic machine that leaks oil.

American tenor, Jay Hunter Morris, in the title role looked like a middle aged Tab Hunter and sang valiantly He moved, acted and sang very well, although the forging scene was transposed down a semitone and sang G’s instead of high A’s and there was no top C in the Act 3 duet with Brünnhilde. Ah where are the Wagnerian tenors with the vocal heft of a Lauritz Melchior, Wolfgang Windgassen or Jesse Thomas? As Brünnhilde, Nina Stemme again demonstrated why she is probably the best exponent of this role. She successfully negotiated the high tessitura of the Act 3 awakening scene and the final duet hitting all the top notes rising to a climatic top C. One, however, misses the power, precision and laser like projection Birgit Nilsson brought to this role in the 1962 Solti Decca Ring and the 1967 Bohm Bayreuth Ring - will we ever hear the likes of her again? As the Wander, Mark Delavan soldiered on. His is a very good voice whose quality is readily apparent in the soft passages, but is swamped by the orchestral climaxes, particularly at the beginning of Act 3. One wishes to hear voices of the amplitude of Hans Hotter, George London or even Theo Adam and Thomas Stewart. Hopefully Bryn Terfel will rectify this situation at the Met later this year. As Mime, David Cangelosi was the surprise of the evening. Possessing a large voice, he sang, acted and moved well. His performance was a ‘tour de force’. Gordon Hawkins as Alberich sang much better than in Rheingold because the role lies higher and he was not required to plummet to the vocal depths of the bass register that the role requires in that opera. Daniel Sumegi as Fafner sang much better than in his previous outings as Froh and Hunding. Perhaps he had a bad patch singing those roles on consecutive evenings. Ronnita Miller as Erda had a distressing wobble that remained as apparent in Siegfriedas it did in Rheingold.

The critique of American development depicted by the despoliation of the natural landscape, along with urban and industrial and indeed now moral decay, shifts to the 1980’s and 1990’s. In Act 1, the Norns weaving the rope of fate, are depicted as laying cables connected to a giant computer. The Hall of the Gibichungs is the grey foyer of a large office, with views of oil refineries, Gutrune in Act 2 is portrayed as the hapless Anna Nicole with long red dress and blonde hair; Hagen’s offsiders are Navy Seals carrying assault rifles. In Act 3 the Rhinemaidens pick up plastic bottles from the river amongst discarded car tyres. The Immolation Scene contains photos of American soldiers killed in the Civil War, World Wars 1 and 2 and current engagements in Iraq and Afghanistan.

Nina Stemme again gave a powerhouse performance as Brünnhilde, with phenomenal vocal power and heft, hitting all the top notes with accuracy. Particular highlights were the denunciation scene in Act 2 and the Immolation Scene in Act 3. People I spoke to were of the view that she is the best Brünnhilde since Birgit Nilsson’s last essays of this role in the 1970’s and particularly since her appearances in the 1972 San Francisco Ring. It was worth attending this cycle just to hear this remarkable performance. It is a pity she is not singing this role in the complete staging of the new Metropolitan Opera Ring next year. Ian Storey as Siegfried gave an excellent performance, a little wooden in acting, but a lovely burnished tone, baritonal in quality, with good top notes, although no top C in the Act 1 duet. As is recent practice, it appears that many opera companies are now casting different tenors for the role of Siegfried in Ring productions - they are doing it at the Met next year. It appears that the current crop of heldentenors is unable or unwilling to sing both roles in the same production. This practice would have been unthinkable in the past, but, given the increasing frequency of Ring performances, there are simply not enough tenors to go round. In the role of Gutrune, Melissa Citro failed to impress in this ungrateful role and Andrea Silvestrelli as Hagen had a rather rough voice and mellifluent and resonant tone. However, one suspects both these artists may be at the beginning of what could be major careers.

Overall, throughout the cycle the orchestral playing under Donald Runnicles was very good. There were a number of rough passages, particularly in Siegfried Act 3. I could be mistaken, but I noticed that there appeared to be some form of sound enhancement coming from concealed speakers on either sides of the Grand Tier. However, like the orchestras of Los Angeles and to a less extent Seattle, the orchestra is no match for the likes of the Metropolitan Orchestra under James Levine and the Bayreuth Festival Orchestra under Christian Thielemann for power, warmth and precision.