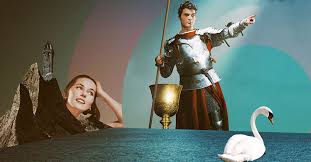 Parsifal is like no other opera in the repertoire. Even in the Wagnerian repertoire, it stands out as a supreme musical and dramatic achievement. It demands huge talent and resources from those who participate in it: here, we had the young musicians of an orchestra (the Australian Youth Orchestra), the principals, the choruses, the conductor and an attentive audience. The music is gorgeous, the story complex but, over a long evening, we audience members have time to absorb much of it. This opera draws its public out of the humdrum of daily life into other realms (the Grail community and Klingsor’s castle). This opera confronts its interpreters and audience: how do any of us confront suffering, desire and lust, love and death? As we witness the transformation of Parsifal, from callow youth to compassionate man, we are forced inevitably to ask ourselves: could we do it too? What value compassion (to suffer with someone) in our own lives?

The reviewer sat in Row E, Seat 33 (the front row) on the opening night. The venue was the Palais Theatre in St Kilda, an attractive suburb on Port Phillip Bay. The experience was especially dramatic for anyone sitting in this front row seat, being blasted away by Richard Wagner’s music and action over a very long evening.

The production was superb on all counts: vocally, dramatically, musically.

The six principals sang well, with conviction and verve:

Burkhard Fritz in the lead role sang well: Parsifal is such an exacting vocal role that you need a consummate performer; Fritz was such a one. His conversation pieces with the wild witch, Kundry, were wonderful (and sometimes scary). There was urgency in Fritz’s voice and its delivery. Fritz developed and showed the change in the character of our `hero’: from naive young man, to self-knowledge, to knowledge of his fellows (Kundry and Amfortas in particular). Through this knowledge, he realises the compassion that is essential to our understanding of this piece.

Katarina Dalayman as Kundry has one of the toughest roles in the Wagner repertoire: how does a singing actress convey credibly this wild, wounded woman without descending into high camp caricature or excess? Kundry is an excessive character (think Salome in the Richard Strauss opera) and you get the feel.

The VO had excellent interpreters in other key roles: Peter Rose (Gurnemanz) and Derek Welton (Klingsor).:

Peter Rose is a superb singing actor; his was a tough role which he acquitted very well indeed. He communicated the back story in Act I expressively. Rose gives an interesting twist to the narrative at the end of Act I: the synopsis (page 10 of the VO program) says that Gurnemanz has become convinced that Parsifal is simply a fool, not the innocent fool enlightened by compassion. But his portrayal of the role said something quite else: he looked back to the audience in puzzlement and questioning as though he really wasn’t sure who this brash young man really was.

Derek Welton was a superb (and menacing) Klingsor: a very strong voice that boomed about the theatre. His physical presence was menacing. In an elaborate outfit (together with face mask), Klingsor conversed with Kundry to huge effect; his lust to murder the young (and naive) Parsifal is consuming. His hunger for revenge knows no limits (well actually there are limits - the arrival of Parsifal).

The Australian Youth Orchestra (AYO) played superbly; it was a pleasure to hear. The sheer excitement of these musicians in playing Wagner was palpable. For the first time I can recall, I was hit by the urgency in Wagner’s score; not just the beauty of the preludes to each Act but their urgency and sense of expectation. This music, essential to the convoluted libretto, sweeps the audience along. The prelude to Act II was chilling: we look forward to the first sighting of the dreaded Klingsor. Klingsor was rejected as a member of the brotherhood of The Grail; his is a `wounded’ character.

Richard Mills did a masterful job: the timing of the music was exceptional. The sounds he evoked from his large and young orchestra were superb and dramatic.

Roger Hodgman went for a simple Parsifal: not many frills, sparse for the most part, thus putting all the focus on the music and its superb interpreters. This 2019 production was a stark (and welcomed) contrast. The sparsity forced us to concentrate on the singers and their particular interpretation of their roles.

A most satisfying and confronting night in the music theatre: the experience was exciting and will remain with those of us fortunate to have witnessed it. Parsifal grabs you and clings: when in the theatre, you cannot ignore it, it demands attention. We can’t ask for anything better than that.