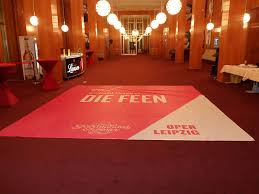 Die Feen surfaces occasionally in festivals and concert performances (for example in Bayreuth this year) but for this Wagner bicentenary-year the Leipzig Opera has been presenting it gloriously fully staged. It premiered in February and the performance we attended was on 24 May. Wagner would have loved it! Full use was made of the stage machinery, allowing two stage levels to be interchanged, and appropriate props to be lowered from the flies. Wagner would have also adored the rich velvets and furs worn by courtiers and pleased that his most challenging role of Ada was triumphantly mastered by the principal soprano. I can't speak for Wagner's sense of humour, but this performance was undoubtedly fun.

The overall impression was of a gorgeous production - bright colours and beautiful costumes and scenery. The orchestra's full tones were especially welcome to me after listening to the thin sound of CDs downloaded onto the mini iPad for the flight over. The outstanding performer was Christiane Libor as Ada; her huge, beautiful voice soared over the orchestra throughout, and produced an unparalleled virtuoso performance in her long and demanding Act II aria Weh mir – and besides she was a moving and convincing actor. Prince Arindal's tenor was a disappointment, but a number of the supporting singers stood out; one of the most brilliant pieces was the duet in which Arindal's huntsman, Gernot and Drolla (his beloved) flirt, quarrel and make up.

Three scenarios are represented: the opening scene is in the present-day (or let's say 1960s) in which a family in a spacious modern apartment is seen sitting around a table. The husband, apparently undergoing an identity crisis, turns out to be Prince Arindal, heir to the mediaeval throne of Tramond. Secondly there is the fairy realm, an idyllic pastoral setting inhabited by Ada, our principal fairy, together with Crown Prince Arindal (from time to time) and a flock of fairies dressed in Jane-Austen-era gowns and bonnets. Thirdly, there is the kingdom of Tramond peopled by Arindal's subjects who are bent on persuading him to return to them. As a rule I don't hold with distractions during any overture, but in this case the opportunity was taken to set up the first scenario in which we see the present- day Arindal move off to an adjoining room and lose himself in the book which is evidently the fairy story in which he plays a leading role. The flexible multilevel set allows the action not only to change from one of these three scenarios to another (which of course keeps the pace up), but to place characters from one world in the setting of another without awkwardness, and sometimes to comic effect. Arindal moves seamlessly between the modern apartment and the court of Tramond and Ada's fairy garden.

Prince Arindal, who arrived in the realm of the fairies by accident, has been living for nearly 8 years in domestic bliss with his fairy wife, Ada (actually she is described as half fairy, half mortal) and their two children. The story is too complicated to relate here but what it amounts to is a battle of wills between Ada's fairy followers and Arindal's courtiers in which both sides attempt to separate the pair, resulting in scenes of busy plotting, sorcery, trials, impossible conditions, hallucinations, despair, and finally, a happy ending – scenes which may start with arias or small ensembles but more often than not end in a chorus when everybody gets into the act. The picture which stays in my mind is of the fairy king lowered on a swing suspended from a large and spectacular butterfly. This is the final scene set in a flowery garden peopled by the fairies, with Arindal's mortal family and courtiers stage left. After Arindal has been granted immortality, he and Ada are joyfully united before, in a surprisingly satisfying conclusion, the present-day Arindal slips quietly back to his Leipzig apartment and wife.

At 20 years of age Wagner had all the skills to write an opera: the overture to Die Feen is enduring enough to stand alone as a concert piece and is followed by winning arias, duets, ensembles and truly lovely choral music. There are two questions to pose: why was it never performed in Wagner's lifetime? And does it have the dramatic and musical worth to be included in today's accepted Wagner repertory? We can assume that during Wagner's early career with his meagre resources and connections the plot was considered too convoluted to stage, Wagner's writing for the principal parts too challenging, and we know that later Wagner himself lost interest in it.

But in considering the second question: has the time now come to overturn its rejection by Richard and his heirs? Comparisons will inevitably be made with the mature works. While Wagner possessed the skills to put a story to music, Die Feen was not his story and although he wrote his own libretto, it faithfully portrays the drama of another writer (but thank goodness minus the serpent), rather than his own. My perception then is that here Wagner is composing the music from the outside. By contrast, when Wagner selects elements of myth and legend and weaves them into his own creation as he does from the Dutchman onwards, his operas are being created from the inside – so the difference is palpable. These reservations notwithstanding, my answer has to be 'yes.' Die Feen is worth occasional revival and why not fully staged in Bayreuth's Festspielhaus? I have enjoyed the music second-hand for some time and to attend a live performance was the highlight of my Leipzig Wagner festival experience.