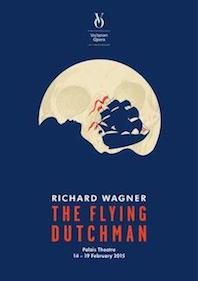 Michael Shmith (15 February 2015 Sydney Morning Herald) nicely puns “Victorian Opera enters a new dimension,” alluding to both the metaphysical aspirations of Wagner’s Der fliegende Holländer as well as the company’s venture into 3D technology —and awards the production a very creditable four stars (with which your Editor agrees). Shmith also notes “How fitting to present Wagner’s The Flying Dutchman right by the sea.” Indeed, one could imagine the two ships tied up at the St Kilda pier and Daland returning home to one of the grand old houses along the foreshore.

Shmith rightly praised orchestra and conductor: “Crammed into the pit (sardines in a tin came to mind) was the Australian Youth Orchestra, which, let loose on full-length Wagner, played beautifully, with clarity and grace, but also with essential power and oomph. Richard Mills, VO’s artistic director, conducted a sturdy performance, without bombast and with utmost attention to orchestral and stage balance.” Given that the publicity for production the focussed strongly on the attraction of the special effects to be used, it would have been a disappointment had they not added something special to the work. As Shmith contends, they did:

“What brought all this together were the extraordinary 3D moving images projected at the back and sides of the stage. This brought the Dutchman, shall we say, an extra dimension. These images, devised by VO’s performance partner, Deakin Motion Lab, effectively and ingeniously take the audience deeper into the drama without confusing or cheapening it. There are authentic blood-red sails for the Dutchman’s ship, scudding angry clouds for the storm, a sun-lit fiord, and, at the end, beautiful and redemptive Northern Lights.”

Your Editor has to confess to a little choking and teariness at the appearance of the aurora borealis: it seemed such an obvious scenic effect to use, but that it has been in any production I have seen suddenly seemed surprising. For me, they added a kind of natural transcendence in keeping with the love story. That the Director chose to extend the image into the realm of supernatural transcendence, as Wagner chose to do in the revised version, with oddly disproportionate silhouettes of the lovers rising and disappearing into the Northern Lights, was not intrusive and did not detract from the overall naturalistic style of the production.

While the 3D effects looked primitive compared with a Hollywood blockbuster’s high definition quality, in his blog Simon Parris (February 15) rightly comments: “Professor Kim Vincs and her crack team from Deakin Motion.Lab have created spectacular imagery that is all the more valuable for the way it supports the storytelling rather than ever threatening to overwhelm it.” In some ways, in fact, the simple imagery matched the comparatively unsophisticated nature of what Wagner considered his first mature opera. Peter Rose reviewing for the Australian Book Review (March 2015, No. 369), agrees with Parris that the 3D projection “is absorbing and totally suitable for this most protean and renewable of composers.”

Rose, though, was less impressed with aspects of the production: “Onstage, however, there was at times a distinct want of direction, especially with the principals. For several awkward minutes in their Act II duet, the Dutchman and Senta remained motionless, as if stranded. Paradoxically, when the chorus (in excellent voice) appeared, everything became mobile, boisterous, convincing.... This was clever theatre, alert and alive.” Your Editor can recall a number of performances, not the least the last production for Opera Australia, in which the same extended moment of stasis occurred. It could be argued that this is a representation of the timeless world into which the characters move in anticipation of their future union in eternity—or so they both dearly hope at this point. However, your Editor agrees that all the chorus members were in fine voice, with verve and subtlety as needed.

Peter Bassett, writing for Limelight magazine (16 February), reminded us that Wagner had particular views about the way in which the work should be staged (not that his views are mandatory) and at least one role was to be sung: “The composer’s stage directions have generally been followed, and attention has also been paid to his Remarks on Performing the Opera ‘The Flying Dutchman’, first published in 1853. Evidence of the latter came with the Dutchman’s crucial monologue Die Frist is um, sung by the excellent and highly experienced German baritone Oskar Hillebrandt. ‘[The Dutchman’s] first phrases should be sung without the slightest emotion, as by one completely exhausted’ wrote Wagner, and this was how it was done.” This directorial stance might have led some to conclude that Hillebrandt was vocally underwhelming, when he was reflecting Wagner’s conception of the character. For your Editor, Hillebrandt mostly sang with conviction and passion, but seemed to tire towards the end, as many singers do.

As would be expected, assessments of the principal singers’ performances were not uniform, partly, it would seem, because Oskar Hillebrandt might have been indisposed on opening night. Your Editor attended the other two performances and was similarly of the view that the singing was not entirely even. Andrew Furhmann, writing for Crikey.com (20 February), considered “American dramatic soprano Lori Phillips brought a warm, sensual tone” to Senta. However, your Editor thought that her voice was not entirely consistent through her registers, with the lower notes fading a little in power. Given the glowing  reviews Phillips has received for her performances of Senta at the Metropolitan Opera and Brünnhilde at Seattle, she has a great future, and her voice is likely to strengthen in the lower registers as she matures. Rose commented of Phillips: “After an assured Ballad, Phillips rose to great heights in the duet with the Dutchman and the subsequent one with Bradley Daley (relishing his high notes as Erik).” Rose provocatively mused of Phillips: “How fine she would be here too, if Opera Australia succeeds in raising the many millions to stage another Ring. Imagine a bayside Ring, away from the subterranean bourgeois plush of the State Theatre.”

Your Editor agrees with Rose’s opinion of Daley, though I would go further to opine that he has a voice smack in the middle of the Fach for this role—secure throughout his register, expressive and supple, used effectively in the service of the role, confident and passionate on stage. He emerged as a benchmark for the other principals, except for Hillebrandt, who still seemed to be finding their interpretation of the roles.

On Warwick Fyfe as Daland, Bassett suggests: “Warwick Fyfe sang the role of Daland with a beautiful tone and rock-solid delivery. His characterisation was not so much that of an old sea dog as of a wily merchant, implied by his fidgety movements.” While some seemed to think that Fyfe’s voice lacked power in the bass register, he certainly hit the notes. His characterisation also seemed to your Editor to fit nicely with Wagner’s conception of the character as one of the Parisian philistines he pilloried in his theoretical essays as willing to trade almost anything, including a child for money.

It was also a delight to see and hear Liane Keegan return to a stage in Australia—another Wagnerian standard voice sadly underutilised in this country. The role of Mary, Senta’s maid, is a hard one to sustain in competition with such strange creatures as the Dutchman and Senta, but Keegan gave her a strong presence, bustling kindheartedly between the spinners and the increasingly bemusing Senta.

Apparently, this production is the first in a series of planned collaborations with Deakin University’s Motion.Lab, and will move to Perth later this year. Given the success of this production, it will be worth keeping an eye out for the other two. It also seems appropriate to give the last word to Professor Vincs, in an interview with Adam Bender from Computerworld on 8 January: “Computer generated imagery has tremendous potential for making opera more accessible. The expense of dragging massive sets across the country has meant that most opera performances don’t leave Australia’s major capital cities. Now that we have explored the visual possibilities of 3D in ‘The Flying Dutchman,’ we will take a closer look at creating more portable opera in the next two projects.”

Bender’s interview is rather cheekily titled: “3D adds depth to The Flying Dutchman in Melbourne,” but the sentiment is apposite: anything that makes Wagner’s works come alive to modern audiences is surely welcome? Your Editor recalls that the first rumours of a Ring Cycle in Melbourne floated the idea that the settings could use all or largely 3D projections that would enable a production to be transported easily and adapted to many sizes of stages.

For the full reviews mentioned above, you can click on the following links: