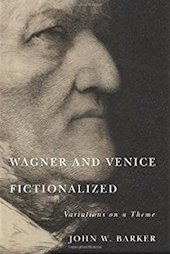 John Barker’s book is quite different from those of Dreyfus and Emslie. As his subtitle suggests, Variations on a Theme, it is a set of variations on a theme that itself is bi-partite. The first element of the theme is his own previous book Wagner and Venice (2008, Eastman Studies in Music, University of Rochester Press – “Not only did that study draw me into a biographical account of Wagner’s visits to Venice and his death there, but it also allowed me todiscover the meaning that Wagner and his death there came to have for Venice itself ” [p. xi].); the second is composed by a set of authors who have taken Wagner’s death in Venice on 13 February 1888 as their own theme for literary meditations on aspects of the man, his times, his significance, and the special factors surrounding his death in the romantic sea-city. Readers of this review will know that, as Barker says, “Both the subject matter he addressed and the creative techniques in which he pioneered had a tremendous impact upon writers in a range of literary forms for decades” [p. xi]. What readers probably will not have come across before is a well-considered selection of some of those writers.

The earliest writer is Vernon Lee, a pen name for Violet Page (1856-1935), who was one of those English and American (and sometimes Australian) people who spent most of their lives on the Continent. According to Barker, Lee developed into a highly regarded “scholar of art history and culture,” which “made her a pioneer in reawakening English interest in the Renaissance” [p. 15]. She was also a novelist influenced by ETA Hoffmann whose work she studied. Barker’s sketch of Lee’s life and career should be an encouragement to those with similar interests to hunt her other work out. In particular, her 1911 essay “The Religious and Moral Status of Richard Wagner,” in which “she condemned the evocation of frank sexuality in the composer’s style and expression” [p. 28], sounds like worthwhile reading, especially in the light of Dreyfus’s book.

From among her literary works, Barker focusses on A Wicked Voice in its final 1890 version. The novella is a strange ghost story in which the hero Magnus is confronted by a ghostly singer, whom it seems is a castrato. Lee composed two earlier versions as she tried to focus her ides and the literary techniques appropriate to her developing story. Barker points out that, although Wagner is mentioned once explicitly as the composer, along with Schumann, of the music of “starry nights,” it is Lee’s account of the world of Venice in the 1890s that is of most relevance to history’s views of Wagner: “... an atmosphere of mostly hot, feverish air (mal aria, moral or otherwise), and a feeling of decay and even degeneracy. It is an atmosphere captured in the writings of many of her contemporaries, such as her friend Henry James. It is the atmosphere within which Wagner himself spent the last months of his life” [p. 27].

The other writers, whom Barker introduces chronologically, range from Lee (1890), through Thomas Mann, Egon Günther, Herbert Rosendorfer, Joachim Köhler (the most recent biographer of Wagner) and finishes with Ray Furness’s work of 2008. Most of the names are not familiar to your reviewer, though Barker’s accounts whet one’s curiosity to find out more. However, fortunately, Barker’s technique gives the reader a detailed chronology of Wagner’s visits to Venice, an overview of the writers and their place in history, as well as a detailed treatment of the writers’ work(s) about Wagner, with a chapter devoted to each writer.

Many Wagnerians will, though, be familiar with Thomas Mann and his interest in Wagner, but perhaps not as manifested in his 1902 novella Tristan, or his 1906 Wälsungenblut (Blood of the Volsungs), featuring twins named Siegfried and Sieglinde. Readers may have read his 1912 Tod in Venedig without appreciating that, though often taken as a picture of Mahler, the hero is closer to Wagner, who did die in Venice. Mann also wrote critical articles about Wagner during his career, as he attempted to come to terms with the man and artist, especially after the Nazi appropriation of his music and his anti-Semitism.

In this bicentenary of the births of Verdi and Wagner, it is doubly interesting to read the account of Franz Werfel’s 1924 work Verdi: Roman der Opera (translated in 1925 as Verdi: A Novel of the Opera). Werfel was a German poet, playwright and novelist (1890-1945). According to Barker, this novel has “been seen as the first landmark in the ‘Verdi renaissance’ that was to work through the international musical world over the rest of the century” [p. 42]. That is, a revival in competition with the generally prevailing Wagnerism of musical culture at the beginning of the 20th century. Werfel, apparently, continued to be a major figure in the Verdi revival.

Werfel’s novel narrates a completely fictitious story of two consecutive visits he imagines Verdi to have made to Venice in 1882-83). Since his success in Aida in 1871, Werfel has it, Verdi has been unable to create a new opera...finding himself surrounded by new directions in music that seem to be leaving him behind – directions of which Wagner is the symbol” [p. 43]. On the first occasion, Verdi finds himself at the Teatro La Fenice during a concert in which Wagner is conducting his symphony (only recently rediscovered by him - this is fact) for his wife and children. Werfel imagines that, as Wagner leaves the theatre with his family and Liszt, “Wagner beheld the face of a man who he did not know, the face of a stranger over whom he had no power, a face firmly closed upon itself and seeking nothing of other. He saw pride and a solitary reserve in the glowing eyes, an effortless energy, which sought to borrow none from him, which stood apart and expressed itself without any secret desire to influence or master other men” [pp. 43-44].

Shortly after, Verdi’s gondola comes abreast of Wagner’s and Verdi for a moment contemplates murdering his competitor, but he is “horror-stricken and ashamed” as his impulse: “No, there was no hate in him” [p.45].

According to Werfel, Verdi leaves Venice, only to return a short while later, more determined than before to meet Wagner. However, he is torn between wanting to assert himself as an artist to another, and dreading that his gesture would be taken as “the supplication of an inferior to a superior” [p. 45]. Werfel then gives a detailed description of Wagner crossing a plaza from the viewpoint of a friend of Verdi’s symbolically named Italo. This portrait struck your reviewer as substantially accurate, as Italo describes Wagner’s overbearing manner to his companion (probably meant to be Hermann Levi, the conductor), his impatience at being interrupted or ignored, and talking endlessly. However, Italo also witnesses Wagner having one of his heart spasms that were becoming increasingly common at this time and feels compassion for him.

Werfel then returns to Verdi, who has finally made up his mind to speak to Wagner, but, they encounter each other unexpectedly at the finale of Carnivale: “And once more into those eyes [of Wagner] came the same pleading, demanding, feminine look: ‘Why do you hate me so, why will you not bow down before the truth, the sole truth, that I am, and join in the universal chorus of praise? [p. 48]. It seems clear that this is Werfel’s suggestion about Verdi’s reaction to Wagner: but it suggests that Verdi has something of an inferiority complex, which seems inconsistent with Werfel’s intention to rehabilitate Verdi’s reputation. This encounter, though, ends comically with Wagner accidentally treading on Verdi’s foot and apologising “haughtily.” Both men tip their hats and move quickly away.

Finally Verdi determines to do the deed and goes to the Palazzo Vendramin where Wagner was staying, only to be met by the porter shrieking “Wagner is dead!” Werfel records Verdi thinking unworthy thoughts about now being free of the competitor, but then “immediately hates himself for such selfish thoughts” [p. 50].

Barker then points out that this is a biased picture of Verdi, whom Werfel admired: Verdi never needed validation from Wagner, and certainly was not uncreative during the period Werfel fictionalises: “Werfel’s novel must, however, be understood as primarily a period piece, and a virtually propagandistic one” [p. 50].

Your reviewer has given Barker’s account of Werfel’s novel more detailed attention because it seems to your reviewer that it gives a fine flavour of the perceptive, sympathetic intelligence that Barker brings to bear on this fascinating by-way in Wagner’s history.

One, though, should not end without mentioning Joachim Köhler’s 2006 Ich, Cosima in which Köhler has Cosima half-dreaming, half-remembering experiences with all the important people in her life during which a complex “autobiography” emerges of this intelligent but deeply flawed woman. This chapter is the longest in the book. The scene is Wahnfried in September 1923 and Cosima has for companions only her maid Dora and her parrot Coco. The figures in Cosima’s “dreams” do not say anything directly; it is all inferred from Cosima’s responses to them, which, according to Barker build a picture of a “genuinely human personality, of a really tough lady. With all her ideals, wounds, vendettas, and scheming.[Köhler] artfully weave together facts and fictions, drawing directly on actual statements and documented information, though regularly interpreting all that to serve his interpretations” [p. 248].

In a very revealing and provocative comment, that is relevant to the other two books reviewed in this Quarterly about Wagner’s views on sex, Barker asserts that “...Köhler concentrates on his portrayal of the Wagner’s marriage. Since the stern Cosima, not one disposed to be a love-giver, had withdrawn from conjugal relations, Wagner became physically starved for the sex and sensuality that was interwoven with his creativity. Craving an alternative source to fulfil his needs, he fixated on the highly sensual Judith [Gautier-Mendes], in a way that made his relationship an unending war. In the process, as Köhler would have it, Wagner became a pitifully spineless old man, readily a victim to temptations but simultaneously dependent on Cosima-ever ready to make outward capitulations, even to show melodramatic submissiveness to her demands.... That, Köhler has it, from the composer who was creating the music for the Ring and Parsifal” [p. 274]. From Köhler’s interest in Wagner over a number of works, Barker concludes that Köhler “...wishes us to understand that Wagner the dramatist is made intelligible only when we see the contribution made by Wagner’s lifelong and complex emotional turmoil and sensual dependencies” [p. 274].

Your reviewer has no hesitation in recommending this book as well. It is written in a highly readable style and Barker’s sensible assessments of each writer’s foibles and prejudices help guide the reader to an understanding of the works themselves. There are some illustrations of the writers to help familiarise the reader with the lesser known among them. This hard back book is also part of the special offer from Inbooks, as detailed in the flyer in this Quarterly.