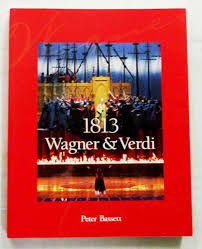 By Katie French
What follows is a commentary: it is neither a deep musicological nor historical investigation, nor a review. It is a very personal response to a book which describes itself as ‘A celebration’.

Visually gorgeous, this publication should come with a warning: BEWARE – it is as seductive as Venusberg, as tantalising as the Flower Maidens, and as splendid to the eye, and the inner ear, as the Grand March from Aida.It looks like a ‘celebration’- in its coffee-table format, its festive scarlet cover, and its wonderful photographs, both front and back. If it sounds like a potential gift (either for someone you love, or for yourself), it should be. (The book’s Designer is Evasio Spagnuolo – could there be a more ‘operatic-sounding’ name? And he, and author, Peter Bassett, have done wonderful things with the way this book looks, so that it more easily-accessible and appealing to a reader, who will want to dip into it time and time again.)

A highlight is the artwork. If you’ve had enough reading about the composers’ lives and historical times, gaze at the illustrations – everything from lithographs, to vase- portraits, production photographs, to stage sets. There are costume designs, medieval manuscripts, sculptures, and scenes from opera films, tiles from byzantine bath-houses, and magnificent architecture – and portraits of all the key players. One really appealing aspect of the production photographs is that so many of them are ‘local’. There is Bruce Martin as Hans Sachs in Die Meistersinger for The Australian Opera in 1993. There is a wonderful reminder of Bryn Terfel’s performance as Falstaff for Opera Australia, and a splendid photo of Elizabeth Campbell in the role of a formidable Azucena in the 1996 Il trovatore. Sadly, a less than flattering portrait of the (in reality) very pretty Deborah Riedel as Amelia in OA’s Un ballo in maschera.

There are delightful little boxed ‘asides’ and side stories– details about E.T.A Hoffmann, or the difference between ‘typhus’ and ‘typhoid’! There are also maps, so essential in books about history, but sadly, the maps are small, as is their print size, with little differentiation in colours, so that they are difficult to interpret. The book also has a very detailed Contents page, but personally, this never compensates for the lack of a good Index in a book. It means, for example, that a reader cannot follow up fascinating, little-known works like Wagner’s Columbus Overture – all that survives of the incidental music written by a youthful Wagner for a work by his dramatist friend, Guido Theodore Apel. (It also means that discarded, but intriguing works – like Jesus of Nazareth or Achilles are hard to find.)

The Introduction is conversational in style, and suggests the composers will receive an even-handed approach. The written text in the body of the work is structured logically and helpfully, with many useful sub-headings – the lives of both composers paralleled, juxtaposed, compared and contrasted, both their biographies, their philosophies, and their works outlined in chronological progression. The history is made relevant, both to the composers’ sense of national self, as well as their artistic consciousness.

Each opera of their operas is set within both an historical and biographical context. Detailed synopses are provided - for Wagner’s operas by the author, for Verdi’s operas from a variety of sources, including Charles Osbourne’sThe Complete Operas of Verdi, Roger Parker’s The New Grove Guide to Verdi and His Operas, and The New Penguin Opera Guide edited by Amanda Holden. Boxed comments on many of the early operas outline their initial reception by both authorities and censors, as well as audiences. Some are fascinating. The title of Verdi’sGiovanna d’Arco (Joan of Arc), was altered to Orietta di Lesbo after interference by the Papal Censor, Orietta, the re-named heroine, now of Genoese descent, leading the Lesbians into battle against the Turks!

The section on Wagner’s Die Meistersinger encapsulates the appeal of this book, and shows how and why it ‘works’. Visually, the chapter commences beautifully, with an historical set design for Act III of the opera, a delightful fifteenth-century woodcut of Nuremberg, and a Romantic painting of Walther von der Vogelweide from Neuschwanstein Castle. Then come the author’s brief Summary of the narrative, a Synopsis of each Act, and an illuminating musical analysis of the structure of the opera’s Prelude. The reader is then treated to pictorial examples of the composer’s ‘thieving magpie’- approach to his works; the Procession of the Guilds with their Banners in Nuremberg – something that, in fact, had been ‘borrowed’ from Zurich Festivals, there being no craft guilds in Nuremburg after 1394 it seems! (What a witty insight into Wagner’s nature.) Then, there is a return to serious business with an explanation of Wagner’s intentions with this opera – his wish to embody the rules which drove his art, countermand his critics, and show that he could be the master of traditional musical forms like the chorale, the toccata and the quintet, as well as compose trail-blazing operas like Tristan und Isolde. The rest of the Chapter is wisely gathered under headings in the form of rhetorical questions – perfect ‘carrots’ for readers who, by now, may be wilting under the information: ‘Who is Beckmesser?’, ‘Is Beckmesser a Jewish Caricature?’, ‘Is Beckmesser a caricature of Hanslick?’. It is clever organisation and presentation.

The book is full of charming anecdotes, like that of the Wagner’s ignominious escape from both creditors and critics in Riga, accompanied by their aptly named Newfoundland dog, Robber. (Like Master: like Dog!) And a depiction of Verdi as the very Model of a Modern Man of Property, not only a Member of Parliament, but a successful landowner and farmer, and purveyor of his own fine pork products, stamped with his own ‘GV’ brand! In fact, in the section on La Traviata, there is a fascinating parallel between the lives and loves of Violetta and Alfredo, and Verdi and his mistress, the former soprano, Giuseppina Strepponi. Verdi’s first wife’s father even makes an appearance – Germont-like. However, for Verdi, there is a happy ending.

Not all is light-hearted. There is good, original food for thought, for example in the author’s proposing that the fate of the Dutchman, in the eponymous opera, results from his hubristic and defiant spirit of discovery, which ‘transgresses the boundaries of knowledge and experience laid down by the Bible and the church’ (p69), (a more succinct explanation than many will have read for a long time.)

With the author’s reputation for extensive knowledge of Wagner’s life and operas, readers may well ask how Verdi fares. Wagner certainly arrives in the world to the greatest fanfare: in the author’s words, ‘Vivaldi’s birth, it was said, had been heralded by an earthquake; Wagner entered this world to the sound of gunfire’. Verdi’s birth is a ‘mystery;’ however, he exits more splendidly, with Toscanini leading the orchestra of La Scala, and a chorus of 820 in ‘Va, pensiero’ from Nabucco, and a procession of the representatives of the House of Savoy following the funeral car of black and gold.

Is there any discernible favouritism? The chapter which precedes Parsifal, is entitled enigmatically, ‘Verdi’s Aida – the perfect opera?’ Teasingly, it is a rhetorical question that the author never answers! With 2013 fast approaching, and with it, the Bicentenary of the births of both Wagner and Verdi, we should be delighted to have been presented by Peter Bassett with such a sumptuous record of their lives. It invites us all to join in – a Celebration.