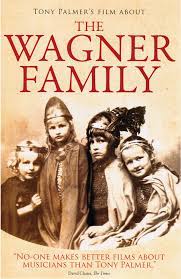 Some reviews in brief

Observations: Hitler at the heart of Wagner
By Jessica Duchen

Wagner: A Film
By Tony Palmer

Some reviews in brief
“Palmer is one of the era’s best art- documentary makers; The Wagner Family is a superb film.”
Andrew Billen - THE TIMES

“A storming curtain-raiser. Palmer casts narrative convention to the wind, instead immersing us immediately in the bewildering genealogy of the Wagners. It’s an astonishing tale which Palmer’s tells with all his usual brilliance.”
Gabriel Tate - TIME OUT

Observations: Hitler at the heart of Wagner
By Jessica Duchen
They’ve been called the “royal family” of Germany; their machinations have been compared to those of the power- crazed characters depicted in their ancestor Richard Wagner’s Ring Cycle; and all of it is for the sake of power at the Bayreuth Festival, in Wagner’s own opera house. The significance of the ongoing saga of the Wagner family is vastly increased by the fact that Adolf Hitler is intimately mixed up in the whole sorry affair.

It was only a matter of time before Tony Palmer, music documentary director par excellence, got his teeth into their story. Invited by Melvyn Bragg to contribute to the last-ever series of The South Bank Show, Palmer has produced a hard-hitting account that proves just how far some members of this family have gone to retain power. The content may not be entirely new, he says, “but what is new is the way that we have pulled the entire story together”.

Most striking, of course, is the Hitler strand. The German dictator’s notorious friendship with the English-born Winifred Wagner – wife of Wagner’s son, the homosexual Siegfried – proved extremely expedient to him. “When he went to Bayreuth, the world took its eye off him: they thought he was just having fun at the opera,” Palmer says. “But in fact he was sitting in the Wagners’ house, planning the invasion of Poland with the children’s geography textbook.”

But the full archives remain closed. If the Wagner family is ever to come to terms with its history, Palmer suggests, the contents of those archives must be revealed. Then there will be a whole new film to make.

The Wagner Family
By David J Baker
“If you haven’t got anything nice to say about anybody,” Alice Roosevelt Longworth once said, “come sit next to me.” Director Tony Palmer must have extended the same invitation to the biographers, musicians and especially the Wagner descendants who address the camera in this verbose documentary that seems incapable of organizing its justified biliousness and outrage.

Palmer’s scattershot approach, circuitous narrative and inadequate identification of speakers and their relationships can make a viewer long for the clarity and focus of a Ken Burns or Sixty Minutes documentary or even a History Channel cram course. Perhaps there are just too many targets — the twentieth-century Wagners’ ignominious affiliation with Hitler; the new generation’s infighting; the Regie-hubris raging in the Bayreuth temple today. But when even the scholars indulge in questionable tactics on camera, disparaging or imitating the minor players, the moral compass fogs up. At times a numbing effect sets in, and you may even start to suspect the motives of Palmer’s star witness, whistleblower Gottfried (son of Wolfgang), who rats out Grandma, Dad and Uncle Wieland with the newfound zeal of a desperate plea bargainer.

At least the denunciations result in a few scoops. Even dabblers in the voluminous Bayreuth/Wagner histories know that the master’s only son, Siegfried, led a double life as secretly gay bearer of the precious Wagner seed. (He was wedded, at age fifty-seven, to eighteen-year-old Winifred, who bore Wolfgang, Wieland and two daughters.) We learn here, from Wieland’s former mistress, soprano Anja Silja, of the shadows cast by that history, and more importantly of Wieland’s anguished guilt about his own wartime experience operating a concentration camp of his own, Flossenburg, close to home in Bayreuth. “That is what killed him,” she states, recalling his death from cancer in 1966. It is also news that, according to one daughter, Wieland’s work at Bayreuth drew heavily on funds from Silja, when we thought the young soprano had merely provided romantic and artistic inspiration.

Both grandsons escaped legal consequences for their past, but the film portrays Wolfgang as the greater villain thereafter. It is possible to doubt some of the accusations, such as that he evicted Wieland’s family from their lifelong home, “Wahnfried,” and destroyed historical evidence, but the footage we see of Wolfgang vilifying his nieces and his own children is almost sickeningly self-incriminating.

In its zeal to equate Wagner and Nazism, the film cites some simple-minded charges, such as branding Parsifal a paean to German racial purity. Too often Palmer relies on knee- jerk associations, pairing Nazi footage with a Wagnerian soundtrack as if the two arose from a single source.

And yet, even this confused jeremiad eventually airs some interesting artistic and ethical issues concerning the current Wagner generation. Wolfgang’s daughters Eva and Katharina, codirectors at Bayreuth, question the family’s exclusive right to rule the festival in perpetuity and the composer’s exclusive domination of its repertoire. Gottfried’s final comment after all the crimes and recriminations also has considerable resonance: “Can you be proud to be a Wagner?”

And finally here’s a Gramophone review of the director’s cut of Tony Palmer’s epic series with Richard Burton as Richard Wagner.

Wagner: A Film
By Tony Palmer
British director Tony Palmer has been making films about music and musicians since the late 1960s, his
idées fixes ranging from Ginger Baker’s drumming for Cream to Richard Wagner. Palmer’s energies remain directed towards explaining to the layman the mysteries behind artists’ biographies, or their creations, and the interview remains his favoured form for doing this. Even the heart of a feature film like Wagner – newly available in an original-length director’s cut (just under eight hours) – is to be found when Richard Burton’s intriguing, almost Brechtian assumption of the title-role speaks directly to camera.

Like a Meyerbeer opera, Wagner at full length is better than Wagner truncated. Charles Wood’s storyline, running from the composer’s Kapellmeister days in Dresden to his death, and linked by Andrew Cruickshank’s skilfully understated narrations, unrolls at a pace that can better accommodate the many drop-in set pieces. Of these, by far the best are the most fictional (or should that be the most ‘spun’?): Wagner’s Hitler-like speech to the Vaterlandsverein, his proto-Jewishness in Music rant about Meyerbeer at a Zürich reception, his dropping of gold coins on Meyerbeer’s head as the latter arrives for the Paris Tannhäuser, and the taking over the end of Parsifal from Hermann Levi with the dismissive ‘you should be baptised’. Here Palmer and Wood are so right in spirit while playing free with detail that one wishes that there had been more like this.

Elsewhere, we get as much mountains and water in Vittorio Storaro’s state-of-the-art landscape photography as the soundtrack (mostly under Solti) gives us the aggressive Nibelung music and the Fire music. It becomes a cultural equivalent of those business lectures that interpolate porn clips to keep the audience awake. There’s also more than a dash of ‘luvvie’ silliness – watchable only once – in the appearance of non-actors Sir William and Lady Walton as the royal family of Saxony, and the camping around of British acting knights Gielgud, Olivier and Richardson as Ludwig II’s ministers. And facts are either very right (Beethoven’s Seventh given with Wagner’s own score emendations) or very wrong (the Paris Tannhäuser sung in German). None the less, if you don’t take things too seriously – it’s a movie, not a docu – enjoyment and increased curiosity about the subject matter is virtually guaranteed. Do try also to catch up with Carl Froehlich’s 1913 silent Wagner and William Dieterle’s comically compact 1956 Magic Fire, music ‘arranged by’ Korngold.