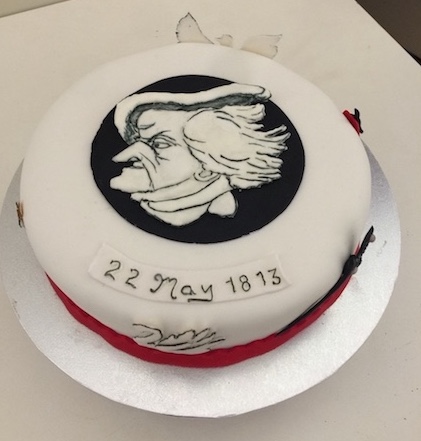 The Wagner Society has celebrated Wagner's birthday (22 May) every year since 1981, first with a supper of typical German food and wines, then by many annual dinners with guest speakers which in 1995 became luncheons at the Women's Club, and more recently by champagne toasts following a recital at the Goethe Institut.

The tradition of having a birthday cake began in May 1982 at the Sebel Town House dinner when Jean-Louis Stuurop [75] made and presented an enormous birthday cake decorated with the ‘Ring motif’ in chocolate piping over a rich cream frosting. In 2013, Richard Wagner's 200th anniversary was celebrated by a dinner at the Royal Automobile Club, with Her Excellency, Professor Marie Bashir AC CVO [798], Governor of NSW, with the assistance of Wagner Society President, the Hon Justice Jane Mathews [622], and Musica Viva CEO Mary Jo Capps [812], cutting Wagner’s birthday cake, an impressive double level cake pictured below, baked and decorated by Barbara Brady [380]. In recent years, this tradition was continued by Barbara de Rome [207].

Cakes have had starring roles in significant Society anniversaries too. The Society's 20th Anniversary cake in October 2000 was also made by Barbara Brady. More recently Barbara de Rome [207] has produced impressive cakes, especially in 2021 with a cake celebrating the Society's 40th anniversary at its March concert and an even more fabulous cake in May to celebrate the Society's anniversary and Wagner's birthday. These three cakes are all pictured below.

Similarly the Society has held regular Christmas parties, the first in 1983 being a picnic at Ball’s Head Park, followed by a cocktail party in 1985. And from around 1992 until the early 2000s, a highlight of the end-of-year parties was the sensational cakes made by Barbara Brady - usually one for the raffle and one for consumption at the party, although one year Barbara was asked to bake four cakes!

A selection of these birthday, anniversary and Christmas cakes for the Wagner Society appears below.