Review: The Ring on a Lap 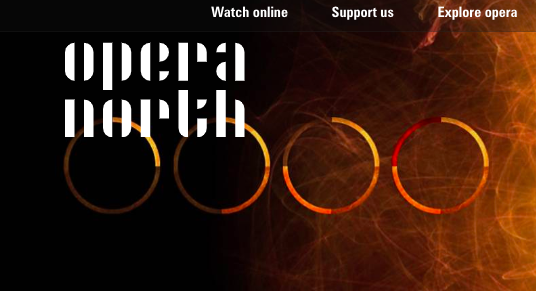 Actually the Ring Cycle took place on my laptop - unaccustomed to watching it in that fashion I could not have imagined such a thing. But when needs must......

Up turned the UK Opera North production. Unlike some others searched for and attempted, during this time of seeming musical online abundance, it came on, and kept coming on and resuming, effortlessly, no glitches, no hitches. Time and again. In my unsuitable - for - lap - top - viewing - opera life, where other sites failed.

Increasingly concert versions of Wagner seem infinitely preferable and enjoyable. There is so much less distraction, and less emotion over horrid productions. This one was effectively presented with minimal but tasteful video background, occasionally and, as appropriate, water, fire, woods. The singers had good to excellent acting ability, moving about and interacting with each other. Dressed in evening attire for their roles, I especially liked the elegant gentlemanly Wotan in brocade vest and golden bow tie. His Fricka was an ‘older’ lady, similarly elegantly dressed. They looked a couple and sang and acted well as one. I have never felt more sympathetic to the pair. This is probably ‘politically incorrect’, or whatever the phrase might be, but I have never seen a slim, very thin and pretty Erda. Have always loved the suitably and usually very round Earth Mothers in all other Ring productions, so this was a change. A little off - putting was Siegfried, a big bald man, he looked more like Wotan’s brother, dressed in an open waistcoat and bow tie undone. Bow tie on Siegfried? Never mind, he sang and acted beautifully. There were actually two of him, but they looked enough alike to be hardly confusing. There were also two Wotans, and two Brunhildes, all similar enough and in the same dress, not noticeable. None of the cast was familiar to me, nor the conductor, who was Richard Farnes. He was not inspiring to watch but his orchestra produced the goods. Credit should also go to the filming and the closeups of the different instruments.

Rather to my surprise, there is something to watching an opera- such an opera- on a small screen, close up. The sound was not bad at all, while not comparing it to a proper hall. There is an intimacy and connection to the music and the story, as though I was more inside it. In a large and beautiful theatre with the orchestra alive and brilliant and larger than life with wonderful famous singers, one is removed, at a distance, literally, in an audience, not right up there, almost next to them, as one is with the small screen.

In my still - getting - used - to - watching - on - lap top mode, sitting on a sofa with my feet up, the fire next to me, an occasional log to add, and a wine glass on the other side for an occasional sip, (Jane Mathews would approve!) one act at a time seemed enough, providing a deeper immediacy, focus, and connection. The singers sang to me, I listened to them, the words resonated deeper, the whole experience was closer, slower. I heard details not heard before, hidden in the grandness of the whole. For example the laughter of the Walkuries - their separate personalities were clear. They had differences, different sisters, not a blur of divine sound.

The horns of Siegfried waiting to talk to the bird were more brilliant and precise than usual. In Gӧtterdämmerung I watched and heard the individual drumbeats against silence, surely for the first time. (Even if Barenboim’s Ring drums were the most musical and exciting ever heard.) Listened to long orchestral sections against nothing happening on the stage, just clips of the conductor and occasional players in small squares around a suitable neutral but expressive perfect video- woods or water. Just the pure music.

It cannot be said that this intimate viewing experience could ever replace The Real Thing but it was nevertheless surprisingly satisfying. And quite suitable for invalids or isolated music lovers in quarantine, who have, in any case, no Wagner operas to attend anywhere in the world. Long may we be blessed with the internet!