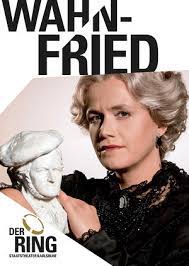 By Terence Watson
To give you some idea of the explosive kaleidoscope of musical and theatrical styles on which Avner Dorman calls to capture his vision of this family and its influence on western culture and history you should have a look at the short trailer on the Karlsruhe Staatstheater website: www.staatstheater. karlsruhe.de/programm/info/2379/. It suggests the crossing of Freudian repressed desire with the circus, “Days of our Lives” with vaudeville, Prussian militarism with British eccentricity, lunatic fantasy with real-life consequences, with many mostly visual references to Wagner (the Dragon, Bakunin, winged helmets etc) and musical allusions to his bête noire the Jews (through Kletzmer music). Dorman’s opera does not end well: whether or not the Wagner family saga has or will seems to be open to debate.

As you can see, the story is not about the great composer, but his family—and many of the strange people Wagner’s reputation, and views—attracted to Wahnfried in Bayreuth, along with many fantastical figures intended to represent aspects of Wagner and his alleged inner, creative world. John Johnston notes: “Directed by the visionary Keith Warner with libretto by acclaimed German playwrights Lutz Hübner and Sarah Nemitz, Wahnfried was commissioned by Karlsruhe Staatstheater to complement their new production of Wagner’s Ring cycle.” The composer, Israeli-born composer and conductor, Avner Dorman holds a Doctorate in Music Composition from the Juilliard School where he studied with John Corigliano. He majored in music, musicology, and physics at Tel Aviv University and studied with former Soviet composer Josef Bardanashvili.

As Johnston says: The production is composed of “an 18-scene historical narrative skilfully blending fact with the ‘post-truth’ distortions and delusions of his inheritors and acolytes.” It is based on the pernicious influence of Houston Stewart Chamberlain, who is initially a foreign outsider in the Bayreuth circle. Chamberlain, “scion of a wealthy British family, now mostly forgotten, but once famous for writing a pseudo-scientific justification of Aryan racial supremacyThe Foundation of the 19th Century, which greatly influenced both the Kaiser and Hitler. [....] It is Chamberlain’s rise to notoriety as a racial theorist and rabid nationalist and subsequent mental collapse that mirrors the rise and fall of Imperial Germany and the Weimar Republic.”

Opera News Desk of 29 November 2016 tells us more about Chamberlain: “In the annals of the Wagner family, the name Houston Stewart Chamberlain is but a footnote. Yet, argues Avner Dorman’s new opera Wahnfried, he was in some ways the link between Richard Wagner and Adolf Hitler. Chamberlain was a failing English scientist who became obsessed with Wagner’s music, after the composer’s death marrying Wagner’s daughter Eva and moving to Bayreuth. There he stayed close to his adopted family and, eventually, to Adolf Hitler, whom he hugely admired. Hitler for his part saw Chamberlain as a mentor and was highly influenced by his magnum opus, The Foundations of the Nineteenth Century - which codified Aryan supremacy and systemic anti-Semitism. Hitler so admired the older man that he often quoted him, and made the journey to Bayreuth for his funeral.” Opera News Desk also comments: “It’s a satirical study of a man who thought himself the living embodiment of a Wagnerian hero, only to realise (as he is tormented by the mocking “Wagner demon”) that he could never aspire to true greatness. And yet, as so often, mediocrity was no bar to the poison he was able to spread....”

“Says Dorman of the opera’s subject, ‘This is a great story, clearly, one that offers fantastic opportunities for satire and a certain amount of playing off Wagner’s own sound-world, since this narrative is in many ways a grotesque offshoot from what he achieved. But it’s not just a fascinating tale, it’s a parable. A parable about what terrible things can happen when a mediocre spirit and intellect are welded to overwhelming ego and ambition. And few can doubt that this is a warning from history to our own times. Opera with all of its power and scale is the perfect art form to express that’.”

“Dorman’s eclectic musical style,” writes Johnston, “rarely quoting Wagner, sardonically comments on the story employing dissonant Prussian marches, waltzes, catchy popular tunes, jazz and klezmer to subvert and underline the overblown Romanticism of the Wilhelmine Empire and supposedly degenerate post-war era. At times the score sounds like apocalyptic Second Viennese School, and at others, especially in the choral scenes, it recalls the ostinato rhythms of John Adams. The family bickerings show his great skill in vocal characterisation and ensemble writing.” The large orchestra included a battery of percussion. “Sets are fluidly moved from facsimiles of original sets to the villa salon and family box, becoming the cell in which the deranged Chamberlain is finally confined. Warner fluidly managed the complex forces and staging with satiric detailed edge.”

Johnston concludes his review by putting it in its intended context: “Seeing this opera half way through a Ring Cycle in Wiesbaden, was like tasting an astringent sorbet between the courses of a heavily sauced Wagnerian banquet. A timely antidote to immersion in the Wagner ethos and warning of the ever present threats of populism, hatred and intolerance.”

In an interesting and thoughtful commentary, Dorman says of himself and his work: “While I am a native of Israel, I have long been connected with the culture and people of Germany. My grandparents came to Israel from Germany, and the household in which I grew up was permeated with German culture, from music to literature. As I developed as a musician, I was particularly influenced by the music of the great German composers, an influence that continues to this day. I struggled to come to terms with the understanding, therefore, that this society — that for which I held such a great affinity and connection — was the same society that gave birth to Nazism, and attempted to rid the world of all Jews. This tension nagged at me from an early age: how could the culture that brought about and championed the work of Bach and Beethoven, Goethe and Nietzsche, be the same one that brought to life the ideology that resulted in the Holocaust?

“As the main character of the opera, Houston Chamberlain is, in many ways, a contradiction himself. He begins as a failed scientist and a foreigner and is scorned by the public. The libretto allows us a window into his psychology; weak and even pathetic at times, Houston earns our pity, despite his harsh and unfeeling manner. The unfeeling becomes the inhumane as he develops his theories — and the crowds follow his lead. The opera grotesquely celebrates his life, depicting the huge following he created at the time while clearly focusing on his vile and racist thoughts and rhetoric. Nevertheless, Houston's commitment to these ideas does not go unquestioned, as the demons of Levi and of Wagner himself haunt and torment him.

“The music of the opera creates a fantastical, at times, absurd depiction of Houston and of the Wagner household. Unlike the works of Wagner, in which the long-form, uninterrupted Gesamkunstwerk allows and encourages the audience to be swept away into another reality, I wrote each scene in Wahnfried with a clear ending. The audience has a brief moment to break from the grotesque action of the stage and consider how it might relate to the world more broadly. In my experience, the only way for me to deal with the gravity of the Holocaust has been through the use of humor — and the libretto of Wahnfried contains that same dark humor.

“Having worked with this story and with these characters for several years, it is quite clear to me that the story ofWahnfried is not simply the story of the birth of Nazism. The spread of hatred, intolerance, and fear that we see inWahnfried and the ideas that Houston Chamberlain wrote over a hundred years ago are still the same elements of the dark and hateful plague we see all around the world today. I see this opera as a cautionary tale that illustrates the power and contagion of hate, no matter the century or the circumstances. I hope that we can learn from the events ofWahnfried and from other darker parts of history and work to build a more peaceful world for the future.”

You can read his full commentary at www.musicsalesclassical.com/composer/work/54606 as well as his blog on the rehearsals for the opera’s premiere at www.rhinegold.co.uk/classical_music/avner-dorman-first-opera-rehearsal.