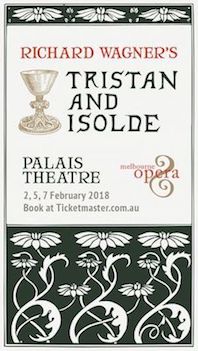 I was booked to attend the opening night of Wagner’s music- drama with my university friend Rod Niemack and we were at dinner in Acland Street when a woman at the next table received a text message and exclaimed: “Oh no, the opera’s cancelled!” I then got the same message. Suddenly, the anticipation of months evaporated. After we finished eating, we went to the Palais Theatre’s box office, exchanged the tickets for the Wednesday performance, hoping by then the indisposed soprano would be well again. I went home on Sunday after a very enjoyable weekend. I checked with the Palais’ box office on Monday night and was reassured that Ms Abrahmsen was indeed going to sing. Then I booked my flight to and from Melbourne. That Wednesday turned out to be very hot, about 36 degrees, and the Palais’ airconditioning struggled to make any difference. I tried to pretend it was Bayreuth in summer. The sweltering temperature rather overdid the sultry atmosphere intrinsic the music-drama.

I enjoyed the performance overall. The two stars were very exciting. Lee Abrahmsen was particularly impressive for someone who has not sung the role before, who was recovering from illness and delivered an almost perfect vocal performance and to act well into the bargain! She was Elisabeth in Melbourne Opera’s Tannhäuser two years ago. In my view, she was better than Petra Lange as Isolde in last year’s Tristan und Isolde in Bayreuth—much more secure and rounded in the top of her range, but she probably needs a little more heft in the lowest part of the register, but that should come with age and experience. The tenor Neal Cooper, of whom I had heard nothing, matched her note for note and probably acted a little better since he seems to have understudied and sung the role in quite a few places. He had no problems that I could detect with that dreadful extended monologue in Act 3! He seemed to be a quite slightly built person, so where did the power come from, I wondered! (The same question could be asked of Ms Abrahmsen.) I gather the conductor intends to take Abrahmsen to Europe to introduce her to various opera houses in which he has worked: fingers crossed for her career!

Sarah Sweeting as Brangäne continued her impressive series of Wagnerian roles with Melbourne Opera: Venus in their 2016 Tannhäuser; Ortrud in their 2017 Lohengrin. She has a warm, secure mezzo voice, is a fine actress as well, and brought a winsome concern for Isolde’s welfare to her role. Steven Gallop as King Marke was suitably commanding, with a solid and flexible bass that well conveyed the character’s grief at the loss of a friend, his sense of betrayal at the apparent cuckolding, and distress about how he is to continue his life. Kurnewal always arouses sympathy in the audience, and Michael Lampard built on this empathy to give energetic and committed support to his friend and lord, while singing with a warm, resonant tenor voice. Michael Dimovski brought a youthful vulnerability and sweet tenor voice to the Shepherd, and Henry Choo sang affectingly as the lovelorn and homesick Sailor.

The sets were not as exciting as the ones for Tannhäuser, but better than the ones for Lohengrin (reviewed by me in previous issues of The Wagner Quarterly). The video back projection for Act 1 was of the sea as seen over the stern, and the leaden sea heaved more or less in time with the surge of the music. I wanted the surge to freeze for a while when the potion took effect, and perhaps to unfreeze again as the act ends and reality intrudes, but that did not happen.

The Act 2 set was reminiscent of the grotto from the Bacchanal and scene 2 of Act 1 of the company’s Tannhäuserproduction, but this time instead of projections of women’s heads turning back and forth, we had streams of water that turned into cascades as the climax arrived, then died down during Marke’s lament. Some of the reviewers have claimed that there was little or “no chemistry” between the two leads. However, I wonder how many productions of the music- drama the reviewers have seen; so many other productions have the singers hardly even sharing the stage together. In this production, Tristan and Isolde snogged a lot, embraced on the convenient couch in the grotto, and even looked as if they were about to do “it.” In a welcome change to the usual take on the love duet, they sang most of it in an embrace, which for me constitutes far more “chemistry” than is usually evident in productions of the work.

The Act 3 video backdrop was disappointing for me—an endless loop of vague clouds of “smoke” or “mist” perhaps over the ocean or a beach, in dull greys, oranges and whites. It appeared to me rather like Monet’s paintings of London in a pea-souper at sunset. I gather from the program that the projections were intended to suggest “an exposed liminal space beneath a scorching sun (the setting described as Tristan’s birthplace....).” Not having experienced a “liminal space,” to my knowledge, I do not know quite what to make of this description. Sometimes, it is hard to have the right mood if one is not sure what the stimulus is supposed to be. I was even more confused when the final video image of the act seemed to be that of a huge close up of the blazing sun seen through the same bushfire smoke. Given that Tristan and Isolde are now supposed to be in their desired realm of the night, a huge moon or just the stars mentioned in the text would have fitted better. However, this is being fussy when the whole production continues the high standards set by Suzanne Chaundy and her teams in their Wagner series.

My major reservation was the way the conductor directed the orchestra. While Anthony Negus has conducted the work many times before, on this occasion he seemed to think he was conducting the Marvel Comic’s superhero action movie version of the music-drama. I’ve never heard the music so consistently LOUD. In the Limelight review (I think) he was quoted as saying something like: “You know there’s only 1 fff in the whole work”!!! His interpretation included number of enormous thwacks on the timpani that could have come out of Verdi’s “Dies Irae”! Admittedly, these mostly came within the climaxes of the first two acts, but such emphatic gestures, and the generally high volume chosen, seemed to me to make the overall performance lopsided. It might be that the conductor thought that he needed to have the orchestra play loudly in the vast spaces of the Palais, but I had no trouble hearing the music when the orchestra was playing those deliciously sensuous and sensual chamber music sections. I have, though, to make it clear that the musicians played very well. The horns, which have many very exposed section, had no fluffs that I picked up. There were only occasional awkward entries in some other sections—perhaps they hadn’t recovered from playing 4fff! With this orchestral ensemble gaining more experience playing Wagner, whose works still do not seem to be considered standard repertoire by our other opera companies, the delicacy and precision needed to play this score in particular will come.

The performance was worth the price of a second ticket to Melbourne to experience this wonderful work. Unfortunately, the Palais was about a third full, but spread thinly through the stalls and front circle. I felt sorry for the company, given how well attended the previous performances have been. Perhaps the weather scared people off!

I would also like to compliment the Melbourne Opera for its dedication to the works of Wagner. His works are peaks of western music and any company attempting to meet the challenge they offer deserves the support of all Wagnerians in Australia (and Australasia in general). I might be dreaming to think that, perhaps, with such successes under their belt, this adventurous, highly professional company might someday soon tackle The Ring Cycle! Certainly, Suzanne Chaundy’s willingness to explore the possibilities of video for creating the mise en scène might help solve some of the technical demands involved in undertaking such a huge work.